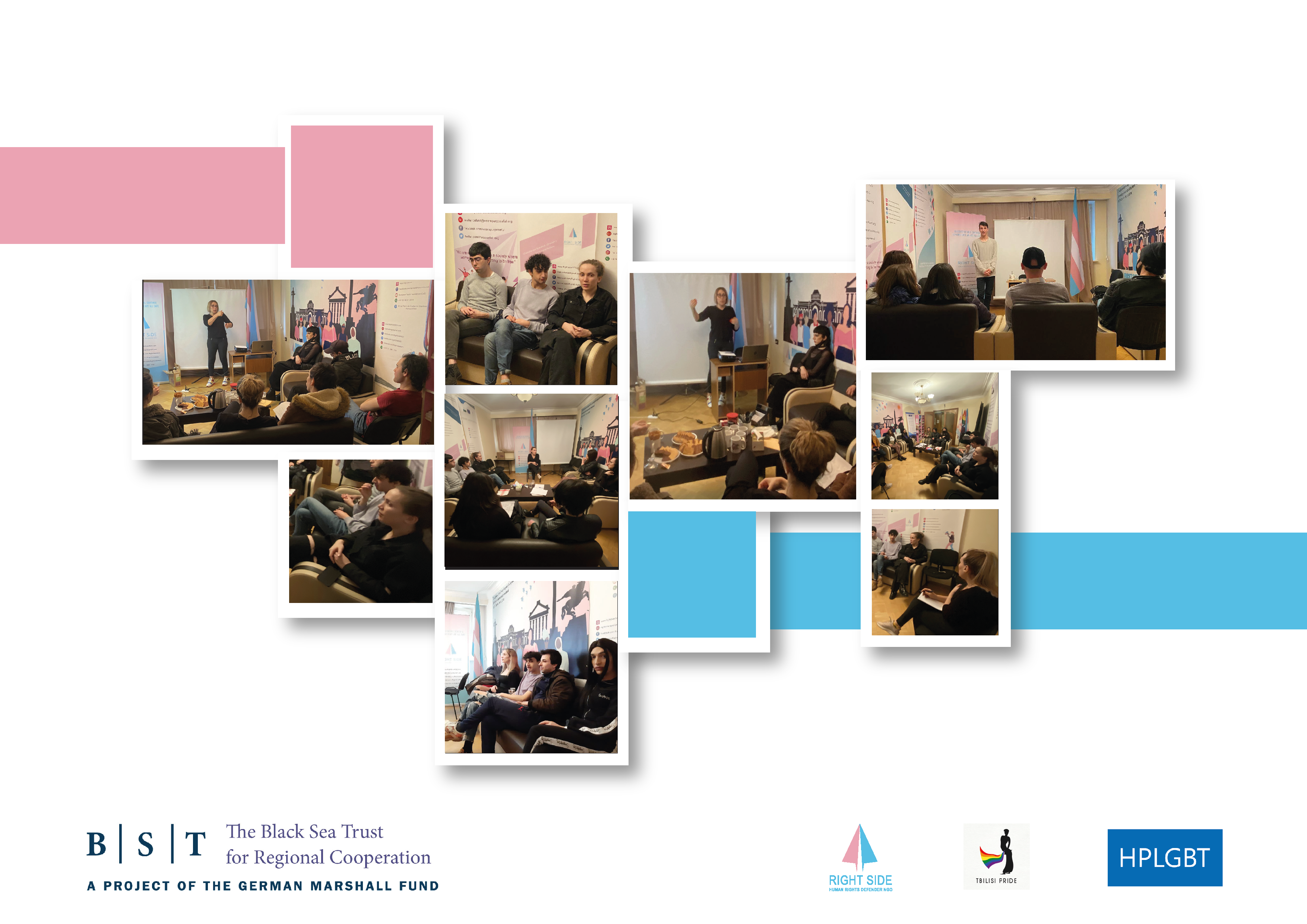 The first meeting took place on February 2 with ten Trans LGBIQ activists on the “Situation of Trans People in Armenia.” During the training, the participants shared their concerns, such as security issues in Armenia, stigma, discrimination against trans people, hate speech on the online platform, the difficulties they had encountered during COVID-19, and a number of other issues faced by Trans people in Armenia. Representatives of the transgender community did a needs mapping, then discussed what to do in the future to improve the situation of Trans people in Armenia. Trainer L. Martirosyan, by documenting the problems and needs of all the participants, assured that in the near future all the problems would be solved through joint efforts by achieving respect for human rights and creating a safe environment for the community in the Republic of Armenia. The participants, by highlighting the importance of similar educational community meetings, suggested a number of topics for the future meetings.

Continuing the series of trainings, the second meeting took place on February 19 in the safe space of the Right Side Human Rights Defender NGO by uniting twenty Trans LGBIQ activists and their parents from Yerevan and different regions. The aim of the training was to create an environment where trans people could discuss family problems with their parents that had not been resolved during those years. During the training, stigma and discrimination by family members, particularly by fathers, were discussed. The end of the course was very emotional, as there were people who for the first time raised issues that had hindered the formation of an atmosphere of solidarity in their family. This important meeting ended with the embrace of parents and children.

The next training was held on February 22, the topic of which was “Our Rights in Police Departments and Courts.” The meeting was attended by ten Trans LGBIQ activists from Yerevan and different regions of Armenia, who had participated in previous meetings. The training was conducted by the Organization’s Lawyer A. Margaryan, who gave the participants full information on how to protect rights in police stations, how to demand a lawyer, in which cases go to the police, he answered a number of questions that were interesting to the participants, and then the participants gained knowledge about the RA judiciary system, formed an idea of ​​the RA courts. A. Margaryan also spoke about the role of the European Court, the European Convention on Human Rights, and presented a number of other details related to rights necessary for all the participants in their future activism. After completing the course, A. Margaryan added that they could apply to him with any legal issues, get advice and representation, then added that everyone should stand up for their rights, live in a dignified life free from stigma and discrimination, ridicule and violence.

The fourth meeting with Trans LGBIQ activists took place on March 1, the topic of which was “Stigma, Discrimination, Hate Speech in the Media and its Impact on the Community.” The aim of the training was to reduce stigma of discrimination against Trans LGBIQ people, to document hate speech cases on social media and find solutions to prevent them. All the activists expressed concerns about the post-war situation in the country, which had exacerbated the level of discrimination both in real life and on the online platform. During the training, activists raised a number of issues related to hate speech, lack of laws that affected their safety and quality of life, as well as they highlighted the cases that had been regularly terminated by the police as hate speech had not been considered a crime.

The next meeting was organized on March 4 with the participation of twenty Trans LGBIQ people and sex workers. The topic of the seminar was “The Impact of COVID-19 on the Activism of Transgender and Sex Worker Communities.” The seminar was conducted by H. Galstyan, Trans LGBIQ Community Mobilizer of the Organization. The participants shared their experience faced during the difficult days of the pandemic, how they were able to live, fight for their rights during those days while having no job, no money, no help from family members. All the participants did needs assessment, discussed the ways to solve them, raised their concerns and received exhaustive answers. The representatives of the communities thanked the RS HRD NGO team and the funding organization for the social assistance provided during the pandemic, which was very important and urgent for them.

At the initiative of activists, the next meeting was organized on March 9 in the safe space of the NGO. Fifteen Trans LGBIQ activists and allies took part in the training. That time the activists chose how to make information posters, magazines, leaflets that would increase the visibility of LGBTIQ people in the media and society. The training was conducted by R. Yeghiazaryan, Graphic Designer of the organization, who shared his past experience, gave the participants detailed knowledge about graphic programs, which would help the activists in the process of conducting public awareness campaigns on social media. The activists thanked the trainer for providing new knowledge and skills, then added that the gained knowledge would be used to break stereotypes about LGBTIQ people on social media. R. Yeghiazaryan assigned the participants to present a poster on human rights protection during the next meeting and spread it on social media.

Continuing the series of meetings on March 13, the activists presented R. Yeghiazaryan the media posters on human rights promised during the previous course. R. Yeghiazaryan thanked all the activists for their hard work, then asked them to be involved in the work of the NGO in the future to raise awareness about the organization at local and international levels. The topic of the meeting was “Me as an LGBTIQ Activist”. Since the topic was very familiar to all the activists, they suggested developing a security guide that would help them be more protected in the future, as activists continued to be stigmatized, discriminated against, and faced a number of security issues as front-line defenders. The participants developed safety guidelines not only for themselves but also for other members of the community to ensure and protect their physical and mental safety. The participants offered to organize a series of seminars for their peers to share their knowledge. LGBTIQ activists also developed a calendar of public events for LGBTIQ people in order to organize awareness-raising events and activities in the future. At the end of the meeting, the participants thanked one another for the effective group work and decided the day of the next meeting.

During the March 24 meeting on “How to Involve Public Figures in LGBTIQ Activism?” the participants, with the help of the trainer, identified the problems of LGBTIQ people, developed activities aimed at solving them, a significant part of which was the involvement of public figures in those processes. The participants acquired skills that would enable them to promote the participation of target groups in leadership and equality establishment projects.

The next penultimate meeting was dedicated to self-care, which was attended by twelve Trans LGBIQ activists, who were involved in the training from Yerevan and different regions of Armenia. The training was conducted by L. Martirosyan, the Founder and President of the NGO, who asked the activists to pay a special attention to self-care throughout their activism, as activists were often exposed to stress, trauma, mental and physical fatigue, and later had many health problems, she stressed the need for rest so that they did not feel burnout in the future. The participants raised all the issues related to self-care, suggested that yoga and meditation meetings be organized frequently, and that all those who need psychological counseling be given the opportunity to visit a psychologist on a regular basis.

The last meeting took place on March 28 in the community’s safe with the participation of ten Trans LGBIQ activists. The topic of the meeting was “The Prospects of Organizing a Trans LGBIQ Pride in Armenia.” Through active discussions the activists tried to assess the risks of organizing a pride taking into account the current situation in Armenia after the war and during the COVID-19 pandemic. The activists, studying the history of prides in a number of European countries, made comparisons with the activism situation and LGBTIQ activities in the EaP countries. Some of the activists recalled the parade in Georgia, which was organized for the first time in Georgia by our partner Tbilisi Pride NGO.

On March 30, after completing the series of trainings, all the participants gathered to summarize the knowledge gained during the two months, to discuss the problems and obstacles faced by Trans LGBIQ people in Armenia during their activism, and then by comparing the activism situation with the one in Georgia and Ukraine they made suggestions and comments.

It should be mentioned that the series of trainings has been implemented within the framework of the project “Activism Building among LGBTI People in the EaP Countries” which is funded by the German Marshall Fund of the United States and carried out by the Right Side Human Rights Defender NGO from Armenia, Tbilisi Pride NGO from Georgia and HPLGBT NGO from Ukraine. The goal of the project is to increase the knowledge of LGBTIQ people on human rights and fundamental freedoms, develop their skills on advocacy and leadership to reduce hate speech, hate crimes and discrimination against them, ensure community’s security and well-being through advocacy and activism and promote the strengthening of the LGBTIQ movement for the establishment of democratic values in the region.