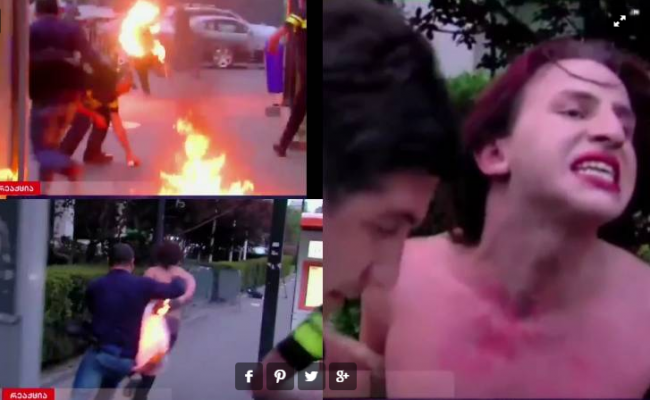 On March 30th a transgender woman has set herself on fire in front of Tbilisi City Hall during a protest against the government “negligence” in the face of the COVID-19 outbreak.

The incident took place when several transgender women gathered in front of the Tbilisi City Hall to protest the government’s lack of support during the new coronavirus outbreak.

Kiparoidze, who communicated with others after the incident and did not seem to have sustained any life-threatening injuries, was later transported to a hospital by ambulance.

“I am a transgender woman, and I’m setting myself on fire because the Georgian state doesn’t care about me”, Kiparoidze shouted after being detained.

“We can’t even pay for our rent. What can we do?”, another protester told TV Pirveli after the incident.

The Right Side Human Rights Defender NGO, in solidarity with our Georgian sisters and brothers, expresses its support for the protesting trans women. As well as strongly condemns the inaction and lack of support provided by the Georgian government to trans people.

We also urge the Government of the Republic of Armenia to heed the above-mentioned calls and to pay attention to all the vulnerable groups that need support in this difficult situation and facing many unsolvable problems as we mentioned in one of our previous articles.