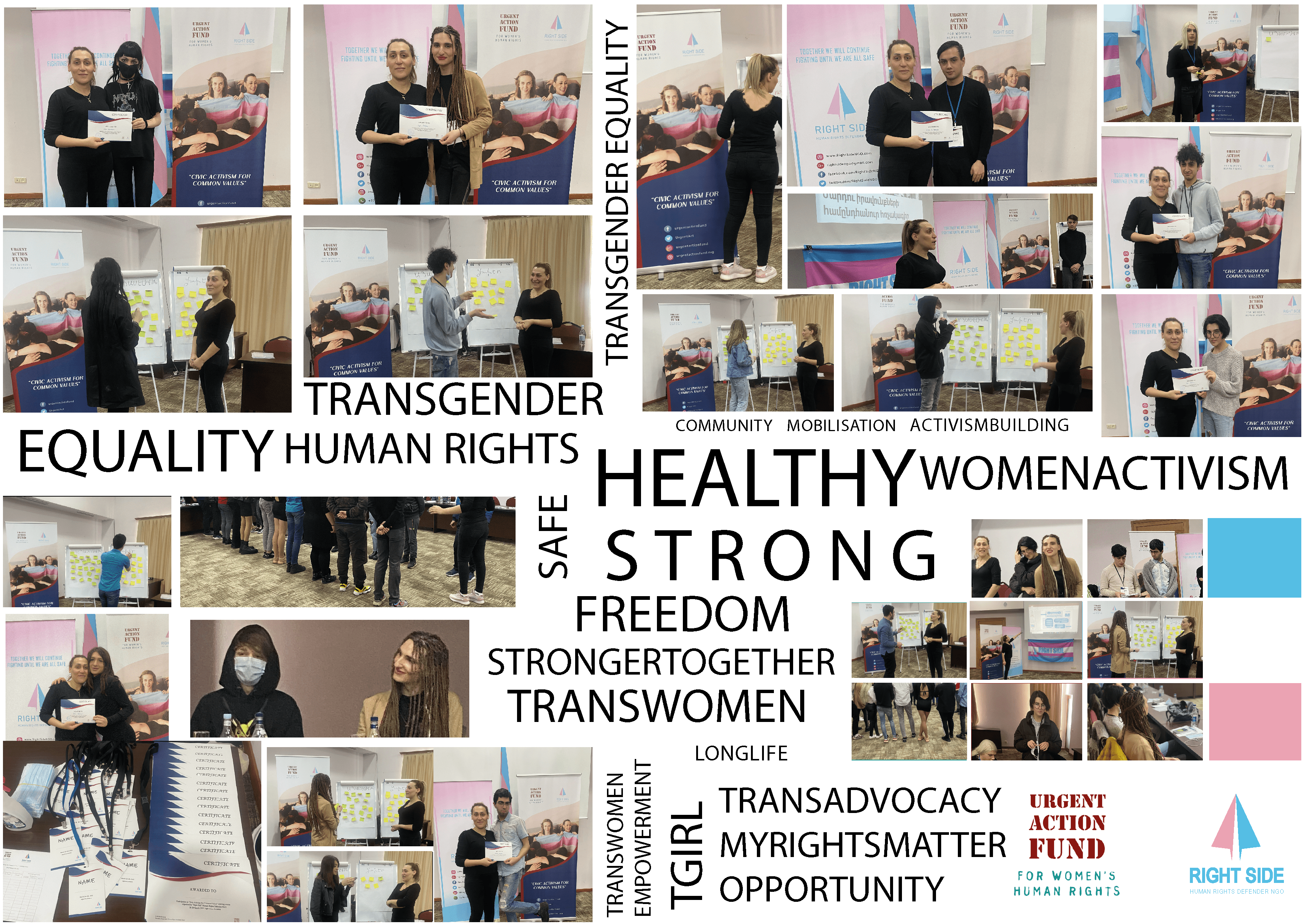 “CIVIC ACTIVISM FOR COMMON VALUES” TRAINING WAS HELD IN MARCH

In March 2021, the Right Side Human Rights Defender NGO conducted a three-day “Civic Activism for Common Values” training for twenty TRANS LBIQ individuals and their parents.

During the three-day training, there were discussed different topics such as the involvement of transgender people in activism, women for peace, the safety of transgender people, self-care and well-being, overcoming interpersonal conflicts, public campaigns, stigma, discrimination, hate speech, etc.

The training was launched by Lilit Martirosyan, the Founder and President of the Right Side Human Rights Defender NGO, transgender activist, who made an opening speech, emphasizing the importance of the involvement of transgender people in civic activism in recent years, thanked all human rights activists fighting for human rights, freedoms and common values on the front lines, paving the way for TRANS LGBIQ people who were still oppressed by society, family members, living by hiding their gender identity and sexual orientation.

Lilit Martirosyan presented the activities, management, goals and mission of the organization, adding that the Community Center of the NGO was always ready to receive every member of the transgender LGBIQ, sex worker community in Armenia and their parents, providing psychological, legal, social and a number of services that would strengthen and ensure their safety and well-being.

On the first day of the training, the participants learned about activism, its nature in a number of European countries and in the USA, the situation of activism in Armenia, its prospects and expectations in Armenia.

Lilit Martirosyan presented how to advocate during activism, the participants studied the situation of activism in a number of European countries, its current stage, they learned to apply the best international models of activism, then, comparing with the situation of activism in Armenia, they said that they would no longer be afraid to make their voices heard through public campaigns, as they had been stigmatized and discriminated against for years by members of the family, educational institutions, etc. Then the participants divided into groups, carried out practical work on the situation of Trans LGIQ activism in Armenia, then presented the work done.

Continuing the discussions on the second day of the training, the participants gained new knowledge about the safety, self-care and well-being of transgender people. Taking into account the regular violence cases against TRANSGENDER LBIQ and SEX WORKERS by the society in the Republic of Armenia, Lilit Martirosyan highlighted the individual security, protection, and well-being of everyone and she provided new detailed knowledge about security.

All participants were very interested in the course, as they all had individual issues related to their safety and well-being, they told their personal stories and received comprehensive answers on how to take care of themselves, others, and their mental health.

During the second half of the training, the participants began to prepare safety maps for themselves based on the acquired knowledge, and then each of them presented what tools were needed in everyday life in order to be protected.

At the end of the day, Lilit Martirosyan reminded about the importance of taking care of mental health and informed that those in need of a psychologist, could be provided with free psychologist assistance by the Rights Side NGO, she sait it was vital for all the activists and she also offered to participate in TRANS camps to gain new knowledge and opportunities.

On the third day of the training, the participants were divided into two groups and presented the topics of the previous two days, shared their new knowledge, then the trainer organized panel discussions on stigma, discrimination, hate speech in social platforms, during which transgender people presented their personal stories trying to get solutions. In particular, it was discussed violence by family members and relatives on the basis of gender identity. Violence was reported by university students, who were forced to study in order to gain professional knowledge, but had been ridiculed and persecuted every day because of their appearance and gender identity.

Transgender people presented hate speech on social media based on their sexual orientation and gender identity, adding that they had repeatedly applied to the police, but their applications were rejected or not processed.

The lawyer of the organization added that he was always ready to listen to everyone’s problems, give them solutions both in the police departments and in different courts, then he added that they should not be afraid of anything, defend their rights and interests.

The participants thanked the organizers and funders, they suggested that similar events be organized more often.

At the end of the training, Lilit Martirosyan, President of the Right Side NGO, thanked the Transgender LBIQ activists and their parents, handed over the certificates, and added that each of them must fight for their rights and a dignified life, creating a safe environment for all of us.

Some of the participants shared their opinions and feelings about the training:

“To be honest, I did not get that much knowledge at school over the years.” Trans woman activist

“Thank you for giving such education, I ask that such seminars be continuous.” Woman Sex worker

“You taught me to be strong, to fight for my community, I love your NGO very much.” Woman Sex worker

“This is my third time participating and every time I get new knowledge, new opportunities, thank you for everything.”        Trans woman

“Every time I applied to participate in the events organized by you, but I was not selected. This time I am lucky and I am so happy that I take with me a lot of knowledge, new friends, new approaches to life.” Heterosexual female activist

Right Side Human Rights Defender NGO is deeply grateful to the Urgent Action Fund | For Women’s Human Rights for the multifaceted support and trust.