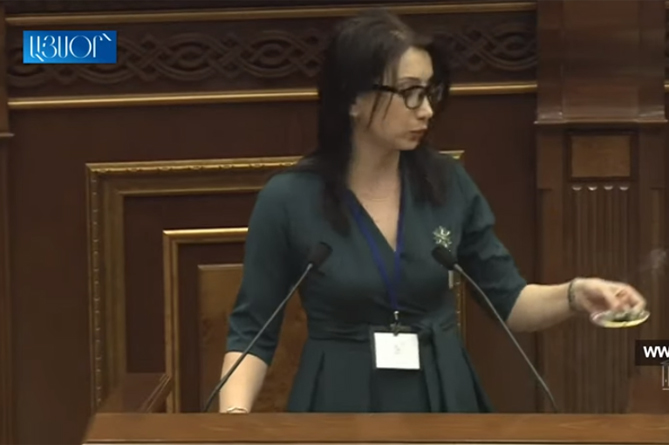 On February 25, 2020 Sona Aghekyan, a former member of the Yerevan Council of Elders, gave a speech during the hearing on “Making Amendments to the Judicial Code and Related Laws” in the RA National Assembly.

The latter, straying from the agenda and raising an additional noise and false agenda, pulled the incense out of the pocket and burned it by saying: “About a year ago, this high chair, the highest chair in my country, they were creating a history, and no one sitting here was trying to get hold of that story maker and tell that transgender person that history was not made here, history could be made by laws only inspired by patriotism and national spirit. Therefore, since the chair of the National Assembly in my country is now desecrated, I am now incensing here and cleansing the Chair of the National Assembly of all the abominations committed by a transgender person here.” Despite the fact that at that time V. Vardanyan presiding the hearing urged to stop burning incense and follow fire safety rules. Aghekyan continued to burn incense, after which security forces had to stop her speech and invite her out of the assembly room.

Although nearly a year has passed since Lilit Martirosyan’s National Assembly speech, however, passions have not yet subsided and the faces that ended their political career continue to speculate on Lilit Martirosyan’s name in order to create false agendas and make meaningless commotion.

Let us remind you that after Lilit Martirosyan’s speech in the National Assembly in March 2019, various religious and nationalist groups and representatives of those groups threw numerous threatening messages to Lilit Martirosyan, organized rallies, marches, tried to incense in the National Assembly and demonstrated other such dangerous activities as a result of which Lilit Martirosyan, her family members and staff had to flee the country for some time, they have applied to the police repeatedly, but none of these applications have so far received a fair trial or simply have not been processed.