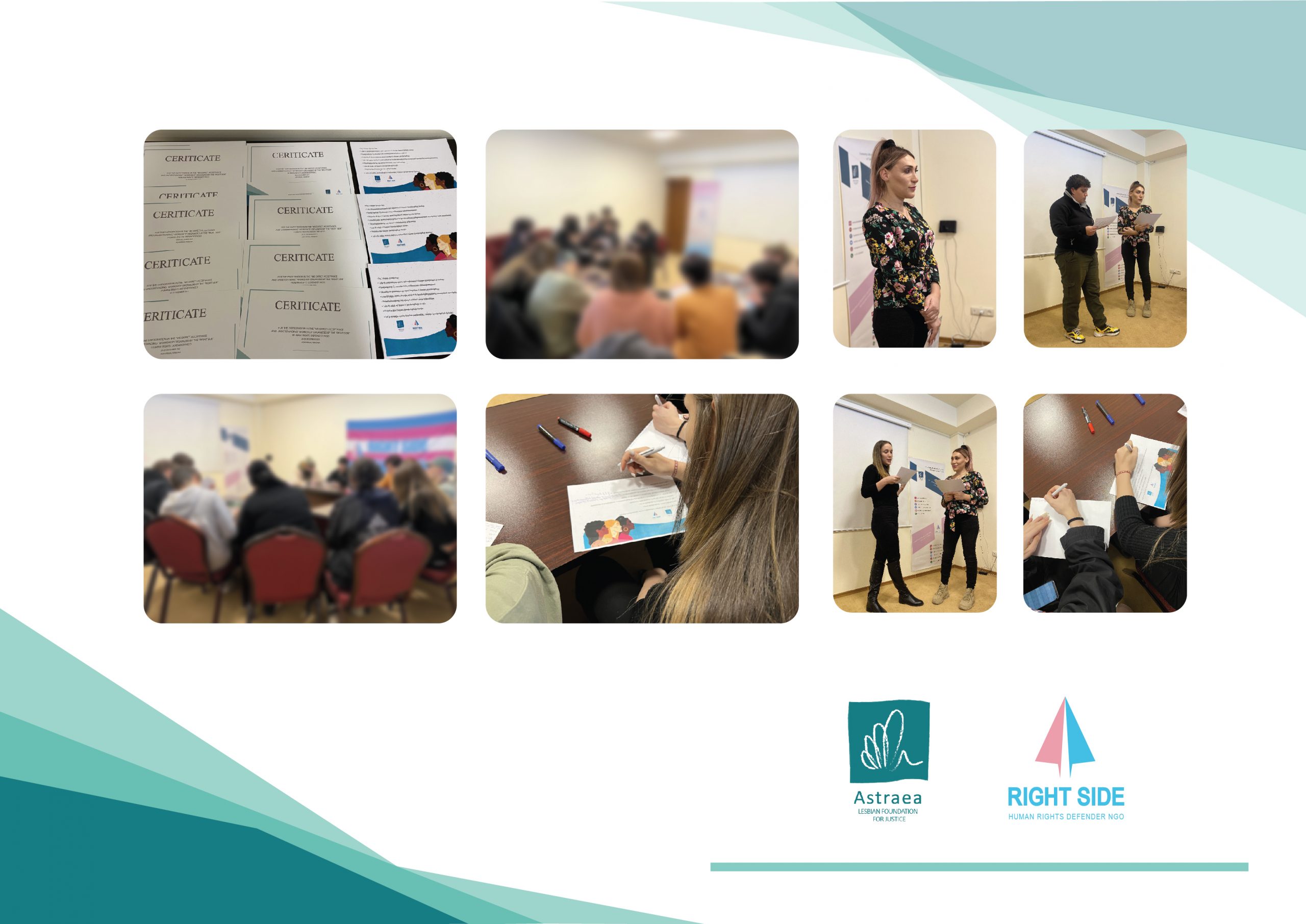 Guided by its strategic goals, the Right Side Human Rights Defender NGO has been working with the parents of LGBTIQ people since its inception, thus, it organizes a three-day outgoing meetings for LGBTIQ people and their parents each year.

In January of this year, a meeting was held with the representatives of the LGBTIQ community and a group of parents, who had arrived from Yerevan and different regions of Armenia.

The topics of the meeting were:

Lilit Martirosyan, the President of the organization made an opening speech, thanked the group of parents and LGBTIQ people who had expressed a wish to participate in the meeting, which was very important for every member of the community to build a harmonious family.

Lilit Martirosyan highlighted the importance of such meetings, as the hard work of previous years with the parents of LGBTIQ people had had a positive impact on the lives of the community members.

During the three-day seminar, the participants performed various practical activities, which were entirely aimed at creating a harmonious and mutually understandable atmosphere in families. LGBTIQ people have acquired skills that will enable them to be understood and accepted by their families. The participants have learned how to work properly with the parents who do not yet have sufficient knowledge of gender identity and sexual orientation, and how to work properly with LGBTIQ family members. They also raised a number of issues faced both parents and LGBTQI family members. In addition, it was suggested that a booklet be developed to help the parents who did not have enough information to work with their LGBTIQ family members.

As every year, this year also a panel discussion with the title of “There are speaking the parents of LGBTIQ people” has been organized. During the discussion the parents talked about the difficult path they had gone through, told how they had accepted their LGBTIQ children and family members. At the end of the discussion, the participants received their answers through questions.

The first day was very exciting, impressive and full of knowledge.

During the following days of the training, the parents and LGBTIQ people were informed about the role and significance of the RA judicial system, the European Court of Human Rights.

The participants watched informative videos on human rights, talked about the best European practice and discussed how to apply the gained knowledge at the local level.

At the end of the training, all the participants were handed certificates and letters of gratitude.

Quotes from the participants:

“It was a very successful meeting, full of information, exchange of experience. Thank you for this meeting. I was able to voice all the difficulties I had faced, but overcome. And today I am standing by my child.”

Parent of an LGBTIQ person

“I would like many parents to be here, to listen to their children, what difficulties they are going through for fear of speaking out about their sexual orientation and gender identity in the family. I think that the time will come when all the parents will understand their children, will accept them as they are, and we must all do that through the education we have received.”

Parent of an LGBTIQ person

“I’m excited, I can hardly say what I have to say, I’m so impressed with this meeting that I want to tell my mother everything about me, how I feel, to say that I love her very much and I do not want to lose her. ”

“Thank you very much for this important meeting, please organize such meetings a lot, we need it very much, and who knows, maybe one day my mother will be sitting here too.”

The training was possible with the financial support of the Astraea Lesbian Foundation for Justice.