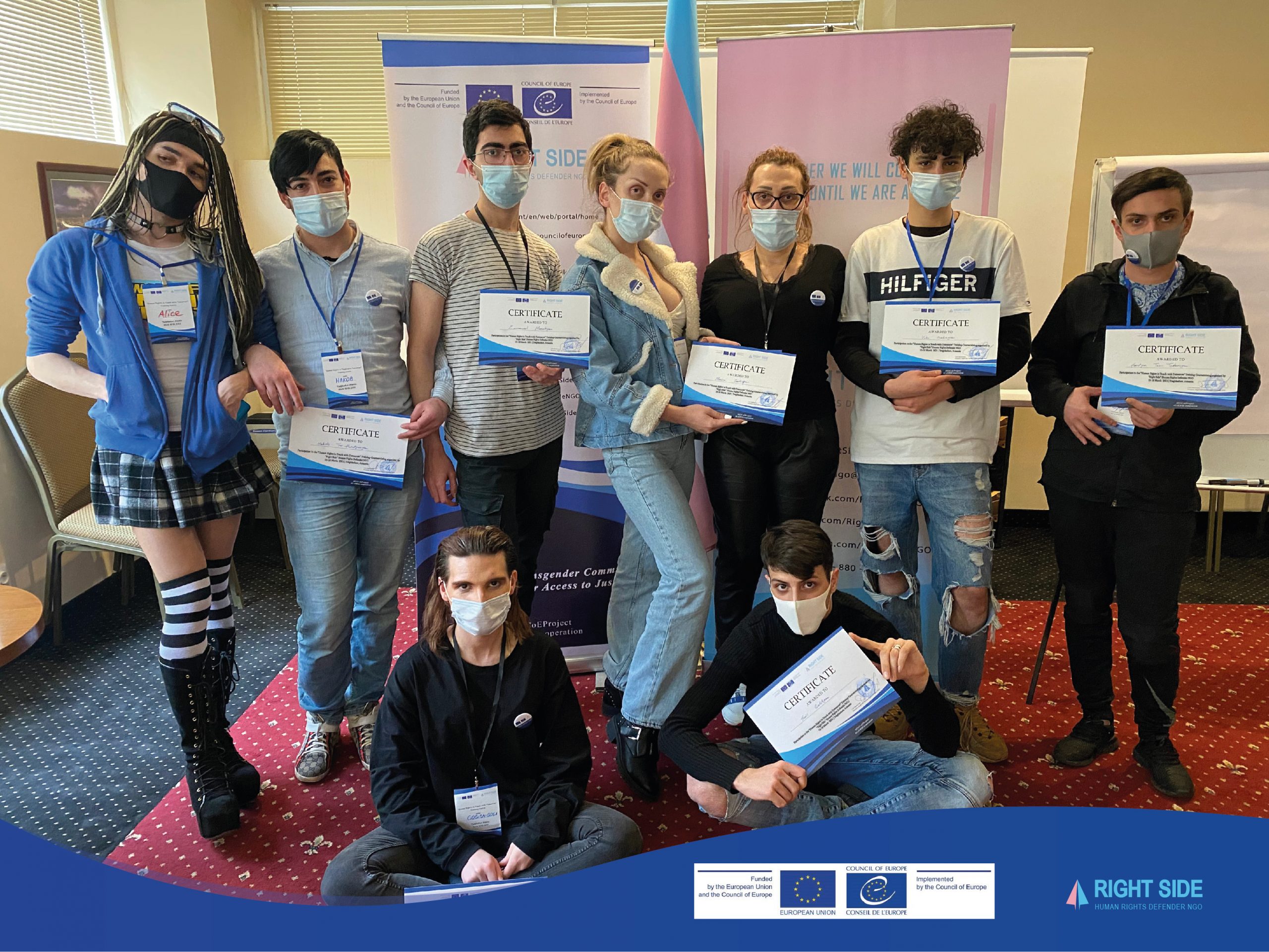 IMPLEMENTATION OF “HUMAN RIGHTS IN TOUCH WITH TOMORROW” TRAINING-COURSE

Twenty young transgender activists aged 18-30 from Yerevan and different regions of Armenia fighting for the protection, security and welfare of transgender people in Armenia took part in the training.

During the four-day training, a number of topics were discussed, such as the rights of trans people in the police, social media, stigma, discrimination, leadership skills, gender identity and sexual orientation, gender based violence, hate speech, European conventions, the situation of trans people in Armenia, individual self-defense, the role of local and international organizations for the protection of human rights, protection mechanisms for transgender people’ mental health and solutions, protection mechanisms for the interests of family members, safety and security issues.

The training was launched by Lilit Martirosyan, transgender activist, the Founder and President of the Right Side Human Rights Defender NGO, she delivered an opening speech, stressed the importance of education among the transgender youth, and thanked all participants for their involvement.

Referring to all the participants in her opening speech, she noted that she encouraged the activism of each participant, adding that every transgender person had to fight for the security, well-being of their transgender community, build a strong democracy, and the opportunity to live with dignity, free from stigma and discrimination.

On the first day, the participants learned the best European leadership models, management skills and methods, they gained theoretical knowledge about the levels of advocacy, its implementation ways and campaigning methods. Lilit Martirosyan presented how community initiatives, specialists and various other groups should be involved in advocacy processes. Then, the participants were divided into groups and did practical work on the topics of leadership and advocacy. The participants suggested using their knowledge to help the organization in advocacy.

Continuing the discussions on the second day of the training, the participants gained new knowledge about hate speech, violence based on sexual orientation and gender identity. The participants said that they were regularly facing hate speech on social media in Armenia, shared their stories that they had repeatedly appealed to the police and courts, but their problems had not been resolved, but they also added that they would continue to fight for their rights and freedoms. They thanked the lawyer of the organization, who had participated in the court hearings of every transgender person, provided representation in police stations by protecting the rights and interests of everyone.

One of the necessary topics of the training was the discussion on the safety of transgender people. The participants shared personal stories about crimes against them, violence, how they had resisted and overcome transaphobia in Armenia.

All participants received detailed information on how to defend themselves, have knowledge on security, and a personal safety guide was developed for each person. In addition, the participants gained knowledge on how to deal with threats and avoid violence based on sexual orientation and gender identity. They discussed how family members ccould be involved in transgender and sex worker rights movements.

That was followed by the presentation of personal stories of transgender people and sex workers about the cases of discrimination, hate speech and hate crimes. The participants were speaking by presenting the difficulties they had encountered during their lives. Everyone shared their story and got acquainted with the story of the others. The participants told about a number of cases of violence, discrimination, hate speech and threats against them. Then, speaking of self-defense, young transgender activists stressed the importance of uniting and strengthening the transgender community.

In order to raise the participants’ perceptions and knowledge, a moot court was organized, where the participants were divided into plaintiff-defendants, there were selected judges, prosecutors, witnesses, and the topic “A transgender person was subjected to violence on the street” was chosen. By playing the moot court, participants gained more insight into how they could defend their rights in the courts and police departments. They learned how to process lawsuits, applications, complaints, got an idea of ​​the role of the courts, the cases and instancesto appeal, learned about the significance of the European Court, necessary cases to apply to the European Court, and they got acquainted with the European Court precedents concerning transgender people.

On the last day of the training, participants raised their voice about their mental health and self-care, each told about psychological violence by family, teachers, friends, neighbors, officials and other groups in society, suggested that regular psychological and social support be provided to transgender people which would be aimed at maintaining the mental health and self-care of transgender people.

Then, at the end of the overloaded day, Lilit Martirosyan organized a meditation with the participants.

At the end of the training, Lilit Martirosyan, thanked the young transgender activists, then handed over their certificates and encouraged the participation of young transgender people in the protection of their rights and the development of a prosperous future.

The young transgender activists expressed a desire to talk about the topics, format, organization of the training, as well as their feelings that they had during the training.

Quotes from the participants:

“Thanks to the organizers, to do all this here in Armenia, is very hard and difficult,” said a trans woman.

“I was finally able to express myself here, I found myself in this safe environment. I’m so happy to have found you, my transgender friends, now, I am stronger with you,” said a trans woman.

“I thank the entire staff of the Right Side Human Rights Defender NGO for doing all this for us. I want this to be continuous, as you are giving me an education that I have not received at school or elsewhere because of discrimination,” said a trans woman.

“Thank you for so much knowledge, I am full of knowledge,” said a trans woman.

“My father tells me that he has to change me, in order I become a boy, but I already know how to educate my father and the rest of the people who call us sick with the knowledge I have gained,” said a trans woman.

“Security is priceless, and I already have clear plans on how to protect myself and everyone else,” said a trans man.

“It was very difficult for me to decide whether to come to the seminar or not, I thought I would be misunderstood, because I had never had such an opportunity to appear among transgender people, but I was wrong, as if I was just born. You let me live,” said a trans woman.

“I imagined so complicated when I heard the word leadership. But now I can say that I am a leader,” said a trans man.

Right Side Human Rights Defender NGO assures that this course is a step towards ensuring the well-being of transgender people, improving the quality of their harmonious and safe life, strengthening democracy in Armenia, and building equality.

Participants are now more aware of advocacy and campaigning skills for equality and human rights, and of course, they will establish a dialogue and cooperation between the transgender community and NGO representatives to fight discrimination more effectively through joint cooperation and active civic participation.

The training has been carried out within the framework of the “Strengthening access to justice through non-judicial redress for victims of discrimination, hate speech and hate crimes in the Eastern Partnership” project which is funded by the European Union and the Council of Europe and implemented by the Council of Europe”․

The views expressed during the meeting can in no way be taken to reflect the official opinion of the European Union or the Council of Europe.