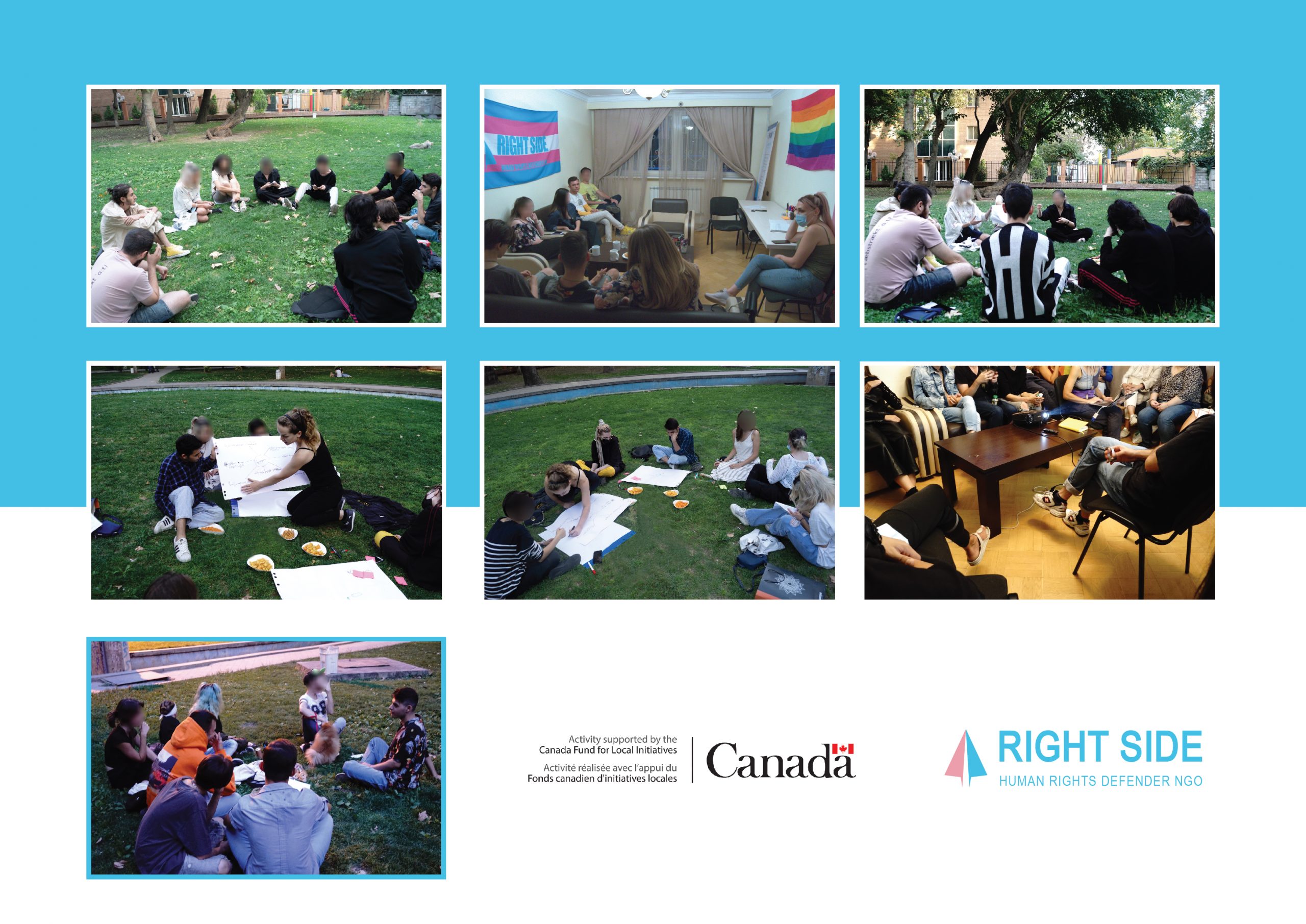 The “Right Side” Human Rights Defender NGO, with the financial support of the Canada Fund for Local Initiatives, has been organizing public educational campaigns for the representatives of the Trans LGBIQ community living in Yerevan and in different regions of Armenia to raise their awareness on the protection mechanisms from hate speech, hate crimes and discrimination. The public campaigns have been organized by the participants of the “Voice of Change” Youth Academy, who have shared their knowledge and skills with the community members, helping them to be engaged in youth work and civic activism.

The meeting organized on September 6, 2021 was attended by 10 LGBTIQ+ people and their allies. The meeting took place in one of the parks located in Yerevan, during which the participants discussed the feminist movement. They presented what feminism meant to them, why feminism should be one of the leading movements in the world, and then the participants did a little practical work, as a result of which they presented the activities of feminists famous to them, also talked about the involvement of transgender people in the feminist movement in Armenia and its importance. At the end of the meeting, the participants shared their impressions and expressed a desire for such meetings to be continuous.

The meeting held on September 10 was attended by 11 representatives of the Trans LGBIQ community, who arrived in Yerevan from different regions of Armenia. During the meeting, the participants, being divided into groups, did practical work, as a result of which they presented the problems they faced in their daily lives, in particular, cases of stigma, discrimination, domestic violence, gaps in the health, education and legal systems. The regional community representatives thanked them for being involved in the meeting and suggested that similar events be held in the regions in order to involve more people.

Continuing the series of meetings, on September 13, the “Right Side” Human Rights Defender NGO held a one-on-one meeting for members of the LGBTIQ+ community from Yerevan and regions who have never participated in such events. The participants emphasized that they want to receive formal or non-formal education, but often fail because of the discrimination, ridicule and violence based on their gender identity. The activists who participated in the academy shared their experiences, stories, urged the participants never to be afraid, to continue fighting for their prosperous future. The meeting was also attended by the “Right Side” NGO Program Manager, who presented the services provided by the NGO (such as training courses, IT and English courses), and encouraged the participants to use the projects possibilities as much as possible.

10 representatives of the Trans LGBIQ community were present at the meeting-discussion on the topic of bullying organized on September 17. During the meeting, the participants shared cases of stigma and discrimination based on their gender identity and sexual orientation in educational institutions, they also talked about violence and hate crimes. After years of severe psychological pressure, three of the participants stated that they had dropped out of education because of such incidents and did not want to continue. The “Right Side” HRD NGO, collecting all the cases raised, offered the participants to benefit from the educational programs, legal and psychological support provided by the organization. At the end of the discussion, a small game was held between the participants, during which the attendees spoke about their characteristics, tried to understand how they could be involved in activism and advocacy. The community members who had participated in the academy promised to help and guide the participants in their activities.