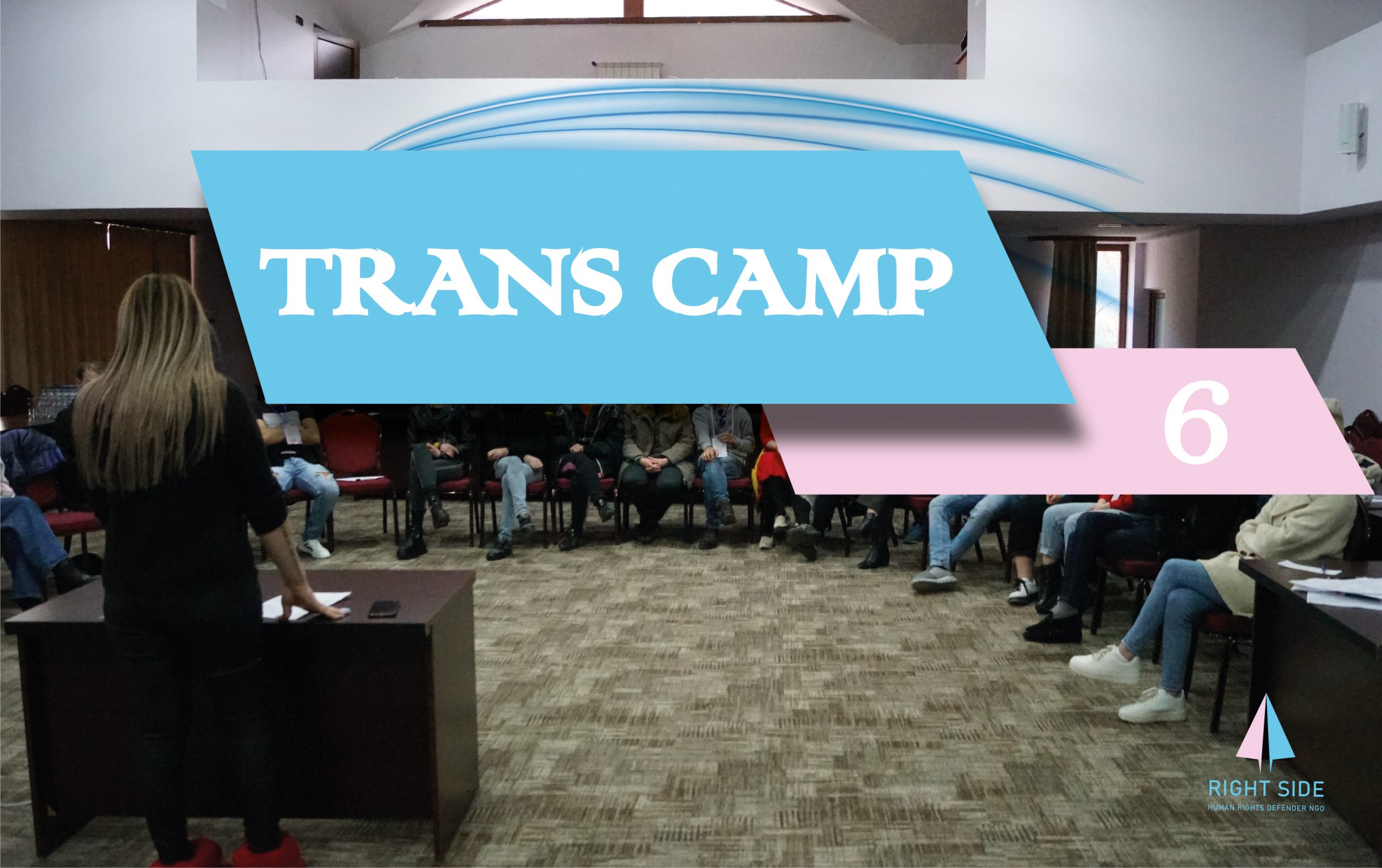 On November 13-15, 2020, “Right Side” Human Rights Defender NGO held its annual Trans Camp under the title “Together we will continue fighting until we are all safe”, which was the 6th one. The camp was organized for Trans people and Trans activists, for their family members and Trans supporters.

A number of topics were discussed during the camp, such as trans people’ rights in the police, on social media, stigma and discrimination against them, the situation of Trans people in Armenia, hate crimes and hate speech, sexual and reproductive health rights, mechanisms for protecting the interests of family members, safety and security issues, etc.

On the first day of the camp, Lilit Martirosyan, President of “Right Side” Human Rights Defender NGO, made an opening speech. She greeted all the participants, thanked them for their participation in the camp, assured that everyone would gain new knowledge, would have a great time and that it would be one of their best trainings. Then the participants got acquainted with each other, which was followed by the definition of rules for the entire course of the three-day camp.

The training was continued with a discussion on gender and sexuality, during which the expert presented what gender was, as well as she talked about sexual orientation, gender identity and other related issues. The participants had an active discussion as the topics were quite interesting for them. The parents of Trans LGBIQ+ and sex worker community members were especially active during the discussion, and for them it was very important to obtain new information about sexual orientation.

At the end of the day, the participants by being divided into groups evaluated the day by presenting their demands, complaints, suggestions, the most interesting topics, as well as the pleasant moments for them and thanked for the consolidation and making the first day of the camp a reality.

The day ended with the screening and discussion of the “Lola” movie. The film tells the story of Transgender woman Lola and the difficulties of her life.

The second day of the training started with the summary of the previous day, then with the presentation of the stories of Trans LGBIQ+ people and sex workers and their family members. The parents talked about their relationship with their children, presented the difficulties they had in the parent-child relationship. Then the community spoke by referring again to their difficulties, the conflicts they had with their parents and the ways of overcoming them. After the presentation of the stories, participants asked their parents about their attitude towards solving different problems such as homophobia and transphobia in the family, or raising the level of awareness of family members, etc.

During the second part of the day, Arthur Margaryan, the Lawyer of the “Right Side” Human Rights Defender NGO conducted a training on “Our rights on social media and in the police station.” The expert spoke about the rights and responsibilities of Trans people in the police, then outlined the sensitive approach police officers should have towards transgender people. Then he presented citizens’ rights during police call or other cases. Afterwards, the lawyer spoke about human rights and freedoms on the online platform and social media. A. Margaryan presented the nature of hate speech, propaganda of hatred, the manifestation of insults and threats on the online platform, as well as the mechanisms of protection of rights in these cases. In the end, the lawyer conducted a knowledge-enhancing game and answered the participants’ questions.

At the end of the day, again the evaluation of the day was conducted, during which the participants mentioned the importance of their parents’ involvement in the camp and their willingness to support Trans LGBIQ+ and sex worker people.

In the first part of the day, during the panel discussion, 8 sex workers talked about the violence, stigma and discrimination against them as Transgender people. They told how they were able to protect themselves and survive in the difficult conditions of life and about the obstacles they encountered in their families, on streets and in all spheres of life in general. As well as they referred to the difficulties, problems and dangers of being engaged in sex work in the Republic of Armenia. Transgender sex workers answered the questions of the participants who, in their turn, expressed their willingness to stand by Transgender sex workers and to protect their rights and freedoms.

In the second part of the day, the camp was summarized and the certificates of the camp participants were handed over. As well as some volunteers were selected who received incentive gifts for helping the realization of the camp in the best way.

Summing up the three days of the camp, the President of the “Right Side” Human Rights Defender NGO thanked the participants, the funding Organization, the trainers, the entire RSHRD NGO staff and said that the camps would be ongoing as they were extremely important for the protection of the rights and freedoms of transgender people. She also mentioned that the camps were the best platforms for us where we united, discussed our needs and problems by looking for effective ways to solve them.

“We will continue uniting transgender people, promoting to raise the level of awareness of Trans people for their well-being and welfare, for the protection of their rights”- said L. Martirosyan.