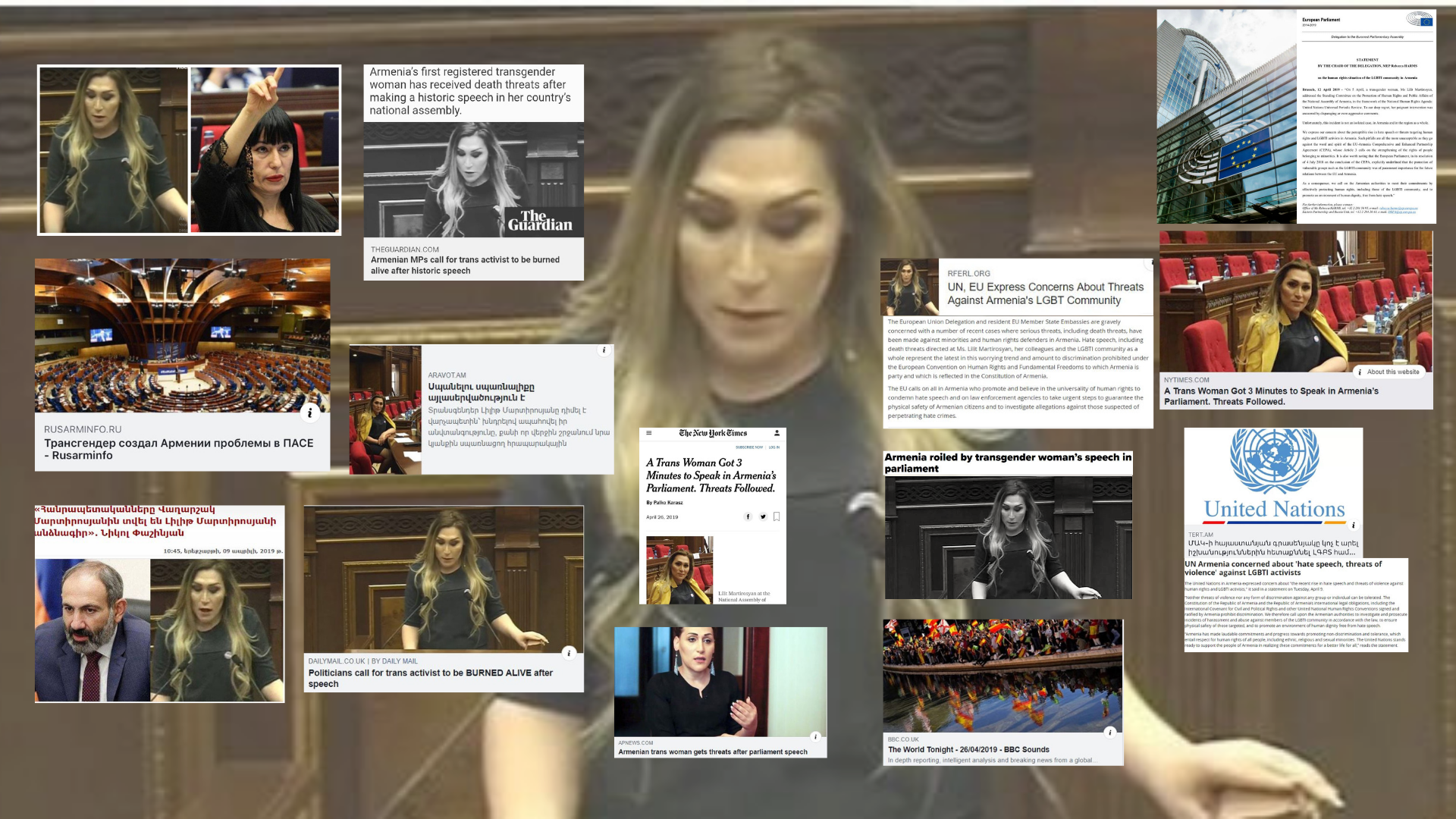 PUBLIC DISCOURSE ON TRANSGENDER ISSUES AFTER LILIT’S SPEECH IN THE NATIONAL PARLIAMENT OF THE RA.

It was a huge risk and courage for the Armenian transgender woman Lilit Martirosyan, the president of the first trans community-based NGO in Armenia, to walk into the parliamentary hall, stand up before lawmakers, and make history through her speech on trans equality on April 5th, 2019. After her speech dedicated to “tortured, raped, kidnapped, subjected to physical violence, burned, immolated, knifed, subjected to murder attempt, killed, emigrated, and robbed trans people” and her call upon the lawmakers to carry out reforms and policies to achieve gender equality, and to ensure human rights for everyone, she with other activists, has been targeted and got death threats.

All the mess began from the day of the parliamentary listenings, when after the speech of Lilit Martirosyan the Chairperson of the NA Standing Committee on Protection of Human Rights and Public Affairs Naira Zohrabyan cried out loudly about Lilit’s speech mentioning that the issues of transgender people had not been on the agenda as no one is violating their rights and talking about that topic is disrespectful to her and to the parliament. Lilit Martirosyan and other human rights defenders feeling insulted left the hall of the National Assembly. After that a priest Ter Ghazar Petrosyan in a company of many transphobic people came to the parliament making hate speech towards LGBTQI people condemning them and calling for criminalization for being LGBTQI. During that anti-trans action in front of the National Assembly there was a man with a kitchen knife announcing that he is ready to kill LGBTQI people. And other participants in that rally noted that gay people must leave  Armenia because they had no right to live in Armenia and that gay people come to destroy our homeland as a Jewish lobby. Human Rights Defender Daniel Ioannisyan reported about the case of a man with a kitchen knife to the police and the investigations on that was rejected. Lilit has also get many messages via Facebook and email from various people telling that they will find and kill her. Even the deliverer of SAS supermarket who brought the order to Lilit to her house, recognizing her when passing her the order, afterwards made the address of Lilit public writing a status “Who wants the address of that trans, I can give it”.

All of them objectively represented the situation towards the problem of hate speech, hate crime and death threats towards transgender activists in Armenia and the transphobic approach of various groups of society starting from the MPs up to the common citizen of the RA. And even though there are some neutrally oriented Armenian mass media which covered this issue properly, still some Armenian local mass media representatives like www.blognews.am[11], http://medianews.site[12], www.armday.am [13], www.bavnews.am[14] , etc, cover the theme of the rights of transgender people much more through materials by manipulative titles on the existence of a transgender person in such a traditional country as Armenia. The head and the leader of the Prosperous Armenia Party of the second-largest fraction in parliament Gagik Tsarukyan said: “This [transgender rights] is a vice and we must hide the vice as we did before.” The member of parliament from the same Party Vardan Ghukasyan suggested to send LGBT people to Holland as a punishment, “as we want a woman to be a woman, and a man to be a man, as you cannot mix a woman with a man.”

It is noteworthy that on this occasion the EU and UN calls to promote and believe in the universality of human rights to condemn hate speech and on law enforcement agencies to take urgent steps to guarantee the physical safety of Armenian citizens and to investigate allegations against those suspected of perpetrating hate crimes. As a response to it the MFA Spokesperson of the RA focusing on the Armenian moral values said: ”The Government of the Republic of Armenia fully adheres to its commitments to protect and promote human rights. The nonviolent democratic revolution, which took place in Armenia, is the best evidence that human rights, generally, are effectively protected if they become part of a social consensus and are perceived as universal social and moral values. Therefore, in this context, our international partners should demonstrate more respect and sensitivity towards the Armenian society and refrain from undue engagement in the public debate, even if they disagree with its tonality.”

While the National Police of Armenia has not been reacting to this incident properly till now. Living with a fear of being killed at any moment Lilit Martirosyan reported about the death threats to police. But even all the reports on discriminatory, aggressive and dangerous life threats towards transgender community were not taken into consideration seriously by the law enforcement bodies and “Right Side” Human Rights Defender NGO got rejection on initiation of all criminal cases towards the potential abusers by the National Police of Armenia. And the lack of political will seems to be dictated by the local Government representatives. Since taking office, Prime Minister Nikol Pashinyan has tried to escape from the discussion of the issue of LGBT rights, calling it “an unnecessary headache to deal with in 10, 20, 30 years.” And it was escalated when the time came to the issue who gives a passport with a “female” name to a biologically “male” Lilit Martirosyan at that moment, the prime minister of the Republic of Armenia Mr. Nikol Pashinyan has forwarded the solution to the Republican Party that dominated Armenian politics before and gave the name changed passport to Lilit. “The moment the (Republicans) gave this person a passport of an Armenian citizen, they included this person in the electoral lists and granted her with all rights of an Armenian citizen,” he said․

This means that the problem of violations towards transgender people has been and is still neglected because of the LGBT non inclusive approach to human rights issues on behalf the ex and the new government of the RA.

And of course after all the problem of media professionalism, its independence and their political orientation is coming over. Even if it is a common truth for media to be independent and cover the issues objectively, politics still impact the media, LGBT issues become means and tool in the hands of many parties to get dividends in convenient moments for them, meanwhile the local media escalates transphobic situation.