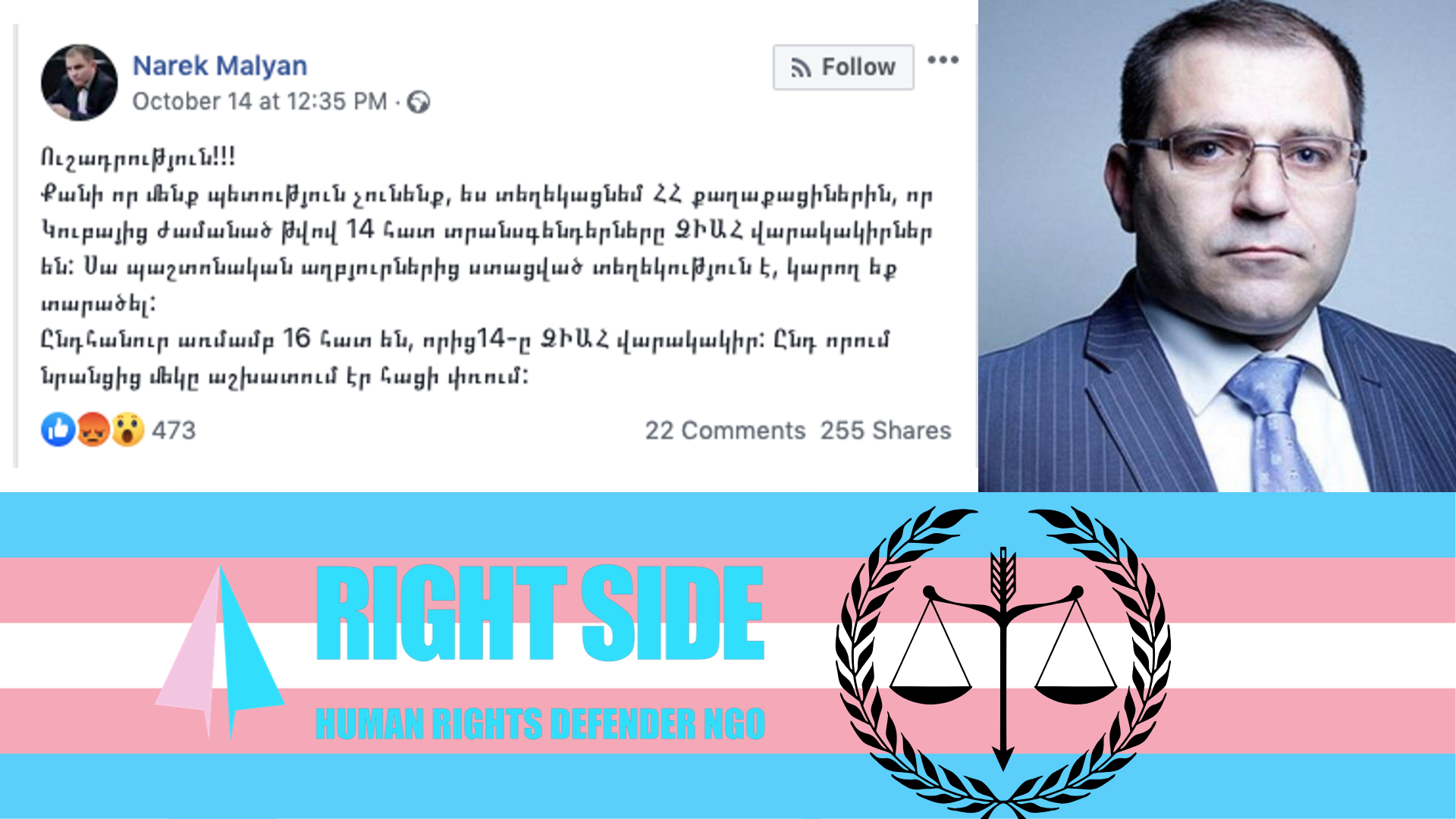 We are informed from the article: “The 14 transgenders from Cuba are infected with AIDS, – states Malyan. What does the Migration Service say?” published on Aysor.am on October 14, 2019, at 15:57, that Narek Malyan, the initiator of the “VETO” movement assures that his information on transgender people in Armenia is official.

As a result of the examination of Mr. Malyan’s social website, the ”Right Side” Human Rights Defender NGO has concluded that according to several articles of the RA Criminal Code, his statements contain crime, in particular:

claiming that the information is from official sources, it can be concluded that if 14 transgenders from Cuba are HIV-infected, then the mentioned information has been obtained either through persons providing medical care and services or other illegal means.

According to Article 145 of the Criminal Code of the RA: “Divulging medical secrets”:

Divulging information on the patient’s illness or the results of medical tests, by the medical personnel, without professional or official need, is punished with a fine in the amount of 200 to 500, or by deprivation of the right to hold certain posts or practice certain activities from 2 to 5 years, or with arrest for the term of 1 to 2 months.

According to Article 144 of the Criminal Code of the RA: “Illegal collecting, keeping, use and dissemination of information pertaining to personal or family life”:

Information which is considered to be a personal or family secret used without one’s consent or dissemination by public speeches, publicly demonstrated works or through mass media, or collecting or keeping, unless this is envisaged by law, is punished with a fine in the amount of 200 to 500 minimal salaries, or correctional labor for up to 1 year, or with arrest for the term of 1 to 2 months.

Mr. Malyan, materializing transgender persons seeking asylum, he has used the word “item” by speaking about them, in which case it can be concluded that Mr. Malyan has a humiliating approach towards certain groups of people due to their sex, national or ethnic origin, alleged gender identity, alleged HIV status, or being alleged sex worker or other social circumstances.

Taking into account Article 226 of the Criminal Code of the RA: “Inciting national, racial or religious hatred”:

Acknowledging Article 3 of the RA Constitution:

Affirming that according to Article 143 of the Criminal Code of the RA, direct or indirect breach of the human rights and freedoms of citizens, for reasons of the citizen’s nationality, race, sex, language, religion, political or other views, social origin, property or other statuses, which damaged the citizen’s legal interests, is punished with a fine in the amount of 200 to 400 minimal salaries, or with imprisonment for up to 2 years.

Based on the reasons for initiating a criminal case under Article 176 of the Criminal Code of the RA:

Presenting the aforementioned facts, the “Right Side” Human Rights Defender NGO submits a public report on the crime to the RA Prosecutor General asking to check Narek Malyan’s publication in connection with the alleged crimes.

The “Right Side” Human Rights Defender NGO sends the copy of the report to the Human Rights Defender’s Office of Armenia to oversee the equity, legality, impartiality of the criminal proceedings on the basis of this report and to exclude possible discrimination against transgender people seeking asylum.