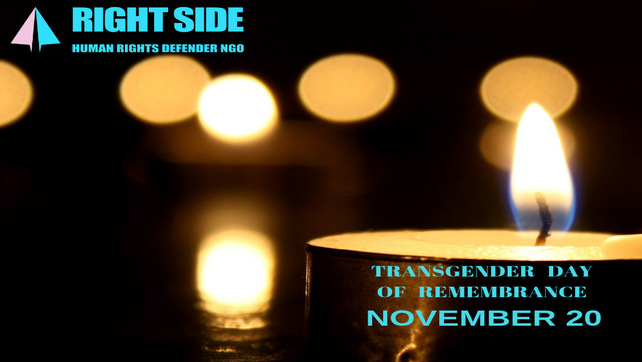 November 20 is the Transgender Day of Remembrance and we honor the memory of trans people, who becamevictims of bullying, stigma, discrimination and violence because of their gender identity and gender expression.
“Right Side” human rights defender NGO as a trans community-based NGO run by and for trans people, stands with the trans community to stop all expressions of hate and all types of violence against trans people in Armenia. 2016-2018 we collected 223 cases of anti-trans hate crimes including cases of physical violence, rape and kidnapping committed by family members of trans people, nationalist groups and even by public authorities. Despite the number of the reported cases to “Right Side” human rights defender NGO, unfortunately we are convinced that the situation of trans people in Armenia is alarmingly disturbing. Trans people face violence, discrimination and bullying happening in all aspects of public life such as medical institutions, state bodies, police stations, educational institutions, sport and entertaining places, accessing to public services, housing, even in so-called “human rights” defender NGOs etc. Despite the progressive cooperation with some state bodies, generally the current policies are degrading and humiliating trans citizens of Armenia without no respect for the Right to Private life and the Right to Physical and Psychological Integrity. Trans people are forced to go through various medical interventions including forced sterilization for their legal gender recognition. On the other side hormone replacement therapy and gender reassignment surgeries are not available in Armenia, because of non-existence of trans inclusive policies.

The recent anti-LGBT developments of Armenia including the speeches of the Prime Minister, Vice President of the National Assembly and other MPs, the head of the Police and the religious leaders of Armenia deepened the social conflict between the patriarchal society and trans community. The speeches of above-mentioned people fostered mobilization of nationalists to organize anti-LGBT protests in Yerevan.  The strategy of making sexual and gender minorities as a political target to gain electoral dividends does not fit to the concept of “Love and Solidarity” of the Velvet Revolution. In the recent 2 months “Right Side” human rights defender NGO has to work in the state of emergency because of the increase of violence, bullying, discrimination, hate speech and hate crime towards trans people sparing no efforts to react to the incidents and to ensure the safety and psychological well-being of the community.
Based on the current situation of trans people in Armenia “Right Side” human rights defender NGO calls:
To the civil society:
-to stand in solidarity with trans community in Armenia, and include trans issues on their agendas.
-to raise the issues of systematic harassment, bullying, discrimination and violence against trans people in Armenia.
-to continue to advocate for gender equality, social justice and inclusion for trans rights.
-to initiate and implement projects that are in line with human rights principles and do not harm the well-being of our community.

To the media:
-to avoid using outdated and misleading terminology and stop disinformation against trans people.
-to make inclusive and sensitive coverage on trans issues.
-to stop promoting prejudices and stereotypes about trans people representing them as sick people who want to destroy Armenian traditions and culture.
-to respect the private life of trans individuals and cooperate with trans people while mailing media materials about them.

To the state bodies։
-to make appropriate legislative steps to ensure legal gender recognition and legal name change based on the right to self-determination, psychological and physical integrity by removing requirements for forced sterilization and other types of forced medical interventions.
-to update the drafted law on equality by including the grounds such as gender, gender identity and gender expression.
-to adopt trans inclusive legislation on hate crimes and hate speech and start documenting and reporting the incidents as other OSCE participating states.
-to amend the current trans-centralized curriculum in the educational system of RA to teach students on inclusivity, sexuality and gender.
-to make appropriate steps to fairly investigate all the cases of violence, hate and discrimination against trans people, especially those done by public authorities.
-to stop promoting hate and bullying against the trans people by politicizing LGBT issues.

To the religious leaders:
-to promote love and acceptance towards all people without discrimination based on gender.
-to accept trans believers in the churches and remove all the types of obstacles in being a fully accepted member of the believers’ community in Armenia.
-to stop the hate speech and calls towards trans people, which are against the values of any religion.

“Right Side” human rights defender NGO believes that all people have an equal right to live free from violence, persecution, discrimination and stigma. The human being is the highest value in the Republic of Armenia. The failure to uphold the human rights of trans people and to ensure gender equality is an obstacle on the path of democracy building and harms the reputation of Armenia as a country and as a nation which chose to establish love and solidarity.
“Right Side” human rights defender NGO reaffirms its values and strategy to continue the work started for the establishment of equality for trans people in Armenia.