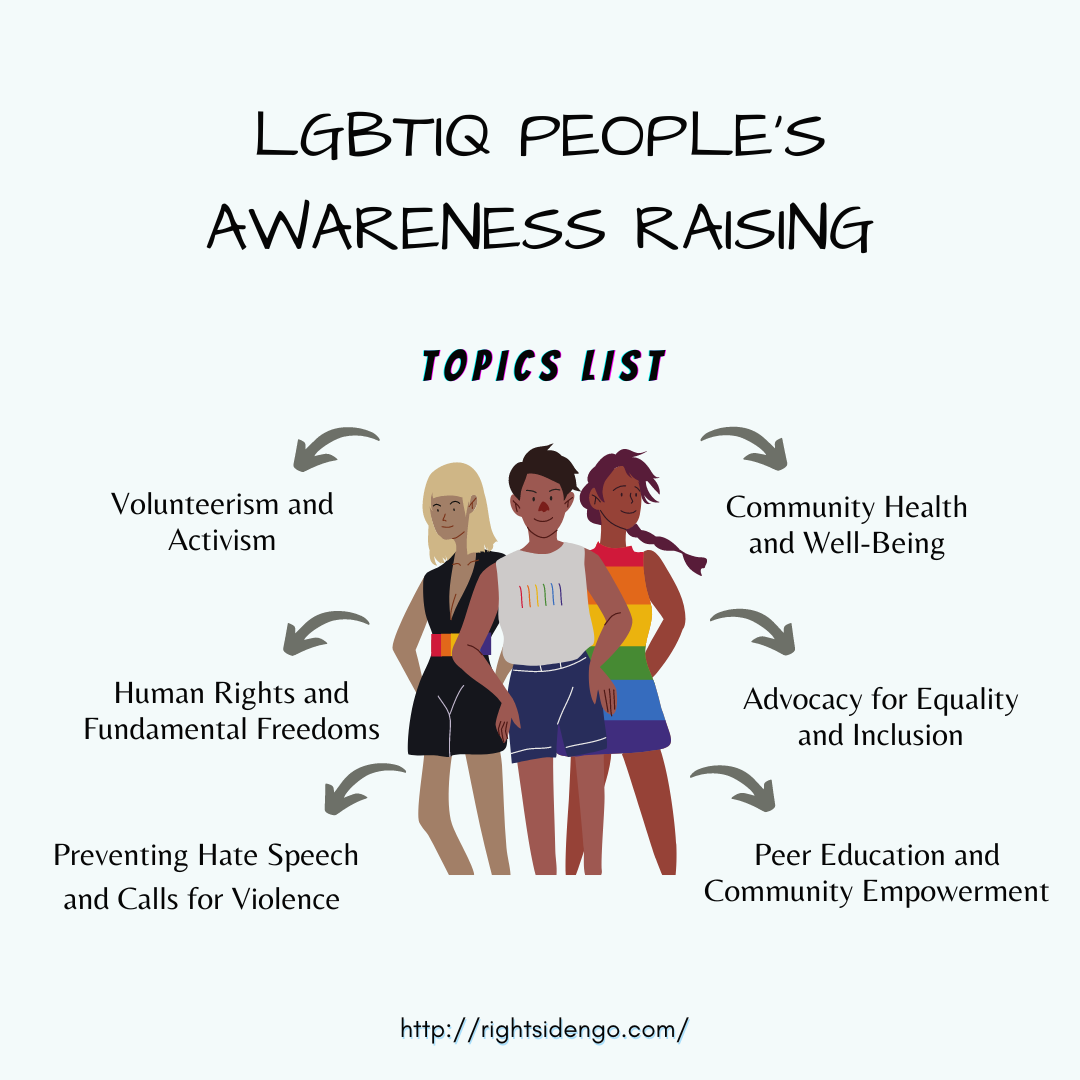 RAISING THE LEVEL OF AWARENESS OF TRANS LGBIQ PEOPLE: SERIES OF MEETINGS

During the period from January to June 2022, the Right Side Human Rights Defender NGO held eight meetings-discussions aimed at increasing the level of awareness of Trans LGBIQ people.

The topics of the meetings-discussions were:

The meetings dedicated to the first topic were attended by those Trans LGBIQ people who had suffered the most from Covid-19. The issues faced by the community during the pandemic were discussed. The participants mentioned that during the pandemic there were days when they did not even have money to buy food or take care of basic needs. One of the participants said that they had been abandoned by their family members, friends, the state and had not received support by them during the days of the pandemic, and without the support of human rights defender NGOs, they would have become homeless and starved to death. At the end of the meetings, the staff of the Right Side Human Rights Defender NGO assessed and registered the needs of all the participants, so that necessary steps could be taken to address them.

As the first and leading organization to protect the rights of transgender people, the NGO experts and volunteers were able to have an in-depth discussion on the legal gaps of gender reassignment with the community members. The participants who had undergone gender reassignment surgery shared the problems and dangers they had faced after the surgery and talked about a number of legislative gaps that endangered the lives of the community members. Those who were intending to undergo gender reassignment expressed their concern about the dangers of sex reassignment surgery in Armenia, as there were no knowledgeable professionals they could turn to for advice. In addition, transgender people present at the discussion spoke about the lack of hormones they needed in the country, one of the participants added that she had been discriminated against in one of the pharmacies, where the pharmacist had refused to sell hormones knowing about her gender identity. At the end of the meeting, the participants mentioned the gaps in the health sector, spoke out about their needs, and suggested that the discussion on the topic be to find more effective solutions.

The next meetings-discussions were organized by the volunteers and activists of the Right Side Human Rights Defender NGO, trying to involve the LGBTIQ community members in becoming volunteers in the organization by their bright examples. The participants were informed about the ongoing activities of the organization and their objectives, each of the participants mentioned how they could contribute to the implementation of the NGO’s work. All the information was recorded by the NGO’s Community Mobilizer to make the most of the community’s potential in future work. The meetings were productive in the way that many of the participants got immediately involved in the NGO’s work, gaining volunteer experience and contributing to the NGO’s development. The volunteers showing the best results will have the opportunity to work in the organization in the near future.

During the next two meetings, the organization’s volunteer, transgender activist Kuka Kasyan presented what hate speech and calls for violence were, shared her experience in combating hate speech on social media, giving communication skills to the meeting attendees, which would help them to combat hate speech on social media. Kuka spoke about the importance of the social media influencers in the protection of the rights of Trans LGBIQ people, noting the need to increase community visibility, good reputation, and disseminate accurate information about Trans LGBIQ people among the public. Kuka spoke about the problems she had faced as a transgender activist and then gave the participants a lot of valuable information through practical exercises that could help them to reduce the stigma, violence, hate speech, and discrimination against Trans LGBIQ people. As Kuka often states, “hatred should not be responded with hatred, it was necessary for Trans LGBIQ activists to reduce hatred by spreading love, positivity, and accurate information about the community.”

The beneficiaries of the Right Side Human Rights defender NGO had repeatedly suggested holding meetings and discussions on STIs, HIV/AIDS, as the topics were not raised enough and the necessary information was not provided to the community members. The discussion was hosted by Lilit Martirosyan, President of the Right Side Human Rights Defender NGO, who was speaking about the importance of having a comprehensive knowledge of the topics that had become taboo in the Armenian society. Often the community members do not know about the virus, do not know how to prevent it and how to lead a normal life if infected. Lilit mentioned that many people are not examined because they are afraid of facing bad attitude and discrimination by the society in case of being infected, as people living with STIs or HIV in Armenia are isolated and ignored by society. Continuing the discussion, Lilit debunked the myths that were so widespread about the virus, urging the participants to often share their knowledge with their peers. The participants of the meeting spoke about the preventive methods that they were implementing. As many transgender people in Armenia do sex work, they need to pay more attention to STIs, HIV /AIDS, and their prevention mechanisms. At the end of the meeting, the President of the NGO encouraged the participants to continue their regular examinations to reduce the spread of the viruses.

The last meeting was dedicated to human rights and fundamental freedoms. The meeting was conducted by Arthur Margaryan, the organization’s Lawyer. During the meeting, the members of the Trans LGBIQ community learned about a number of laws and bodies protecting their rights through practical work. Arthur also organized a small moot court with a made-up criminal case by introducing the participants to the peculiarities of the criminal legislation and the proceedings in advance. At the end of the meeting, the participants expressed a wish that the trial imitation games be included in the training-courses to be organized by the NGO.

The meeting-discussions were made possible with the financial support of the Astraea Lesbian Foundation for Justice.