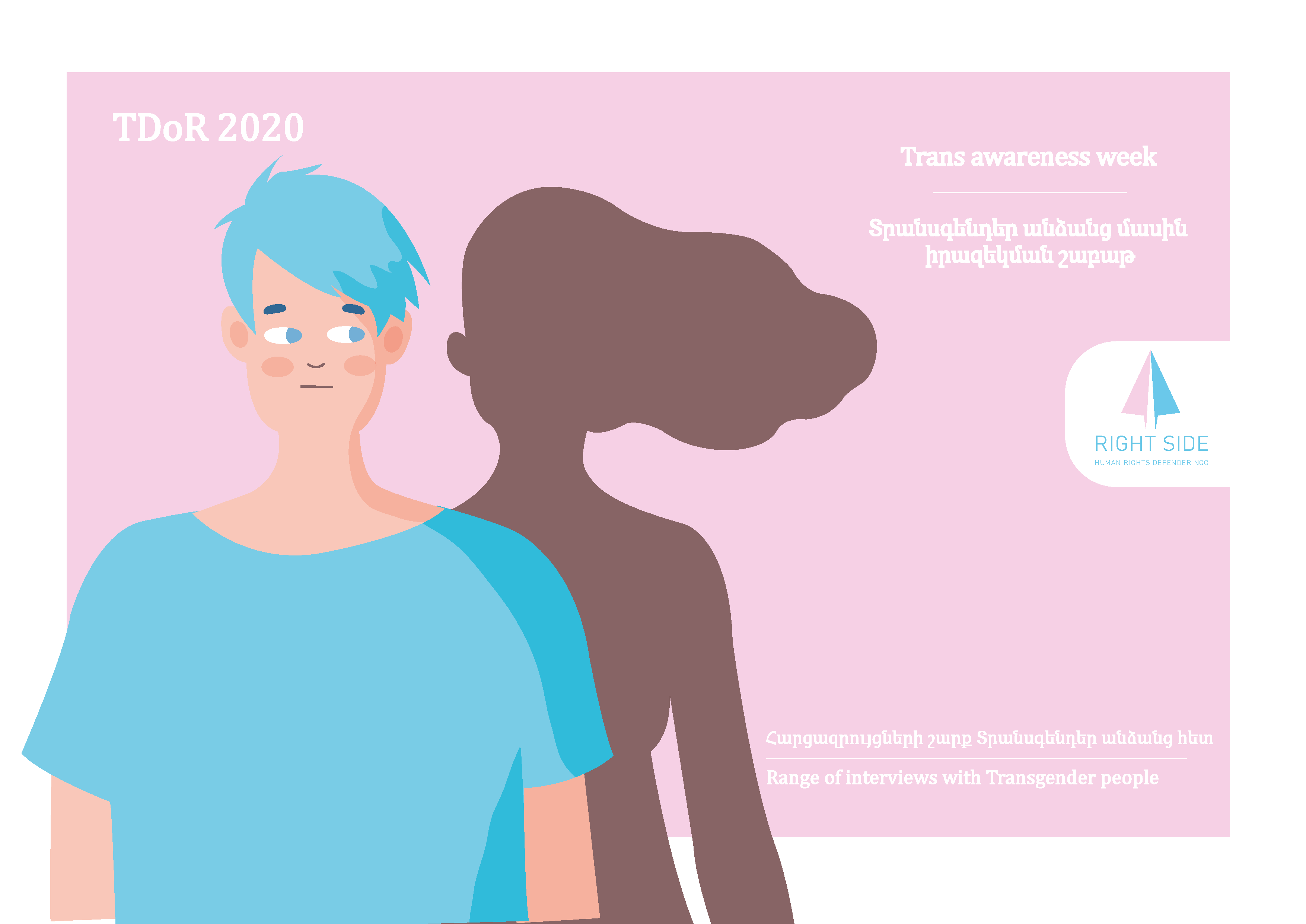 RANGE OF INTERVIEWS WITH TRANSGENDER PEOPLE

“Right Side” Human Rights Defender NGO, working with Trans LGBIQ + people and sex workers in the field of the prevention of violence against them on the basis of the SOGI, once again records that violence against the above-mentioned vulnerable groups have not stopped, moreover, it is still regular.

“Right Side” NGO, ahead of the Transgender Day of Remembrance on November 20, is continuing the series of interviews with Transgender people.

This time we talked to a homosexual student living in Yerevan who did not want to introduce himself for the safety of his life and health. The 19-year-old boy does not deny that there have been a lot of violence cases against him. Taking into account the fact that he lived in the region before moving to Yerevan, he always tried to hide his identity as much as possible.

– While living in the region, I was doomed to live in secret, because even when I tried to wear ripped or tight pants, the “qyarts” (degraded culture) would not miss the opportunity to initiate a conflict, especially when I did not communicate with them, – says the fellow – although they weren’t so mean to me, because my brothers and my uncle were used to protect me. Everyone knew that I was the son of a powerful man’s sister. That way I was insured. But later, before I moved to the city, all kinds of violence had been exposed against me.

You mentioned that there has been many violence cases against you, who was responsible for that?

– I ran away from home because one of my relatives had told the others about my SOGI. I remember I had been in Yerevan because of my work there and when I returned home, without a word they grabbed me and started beating me. My uncle, my cousins, my mother were beating me, in a word, there were gathered about 20 relatives and everyone was humiliating and beating me until I fainted. All that lasted for several hours in one of the rooms of our house, where I was kept locked up. My mother woke me up, I could not speak anymore, I couldn’t even stand up. When they tried to talk to me, I could not give an adequate answer, as a result some of my cousins spat on me, hit me again and all that time I was lying on the floor. They wanted me to say that I would change and “I would become a boy, I would behave like a boy”, but I could not even speak. I was finally able to ask for some water and when they came out to fetch me water, I threw myself out of the window and ran as fast as I could. The whole village was looking for me. It was a nightmare for me.

Have you been abused only by your family?

– No. There have also been violence by the police and by other boys. For example, the police has mocked my movements and appearance. However, these have been nothing compared to domestic violence, – our interlocutor continues by answering to the questions about the consequences of violence on him. – I was very affected by the violence from my family. I was not recovering for days. I found a shelter in one of my friends’ house who supported me in every way. I still have worries and anxieties that I can’t overcome. I was supported by my friends and some of their family members. I applied to one of the community-based organizations the social worker of which worked with my mother for a long time, then I received a financial, as well as a legal support, because I originally intended to report about the domestic violence I was affected. Now everything is fine, I feel good, I have a job, and I live alone. I feel better than ever! Later I found out about “Right Side” Human Rights Defender NGO and its activities. They also expressed their readiness to support me in any issue.

The interview is edited.