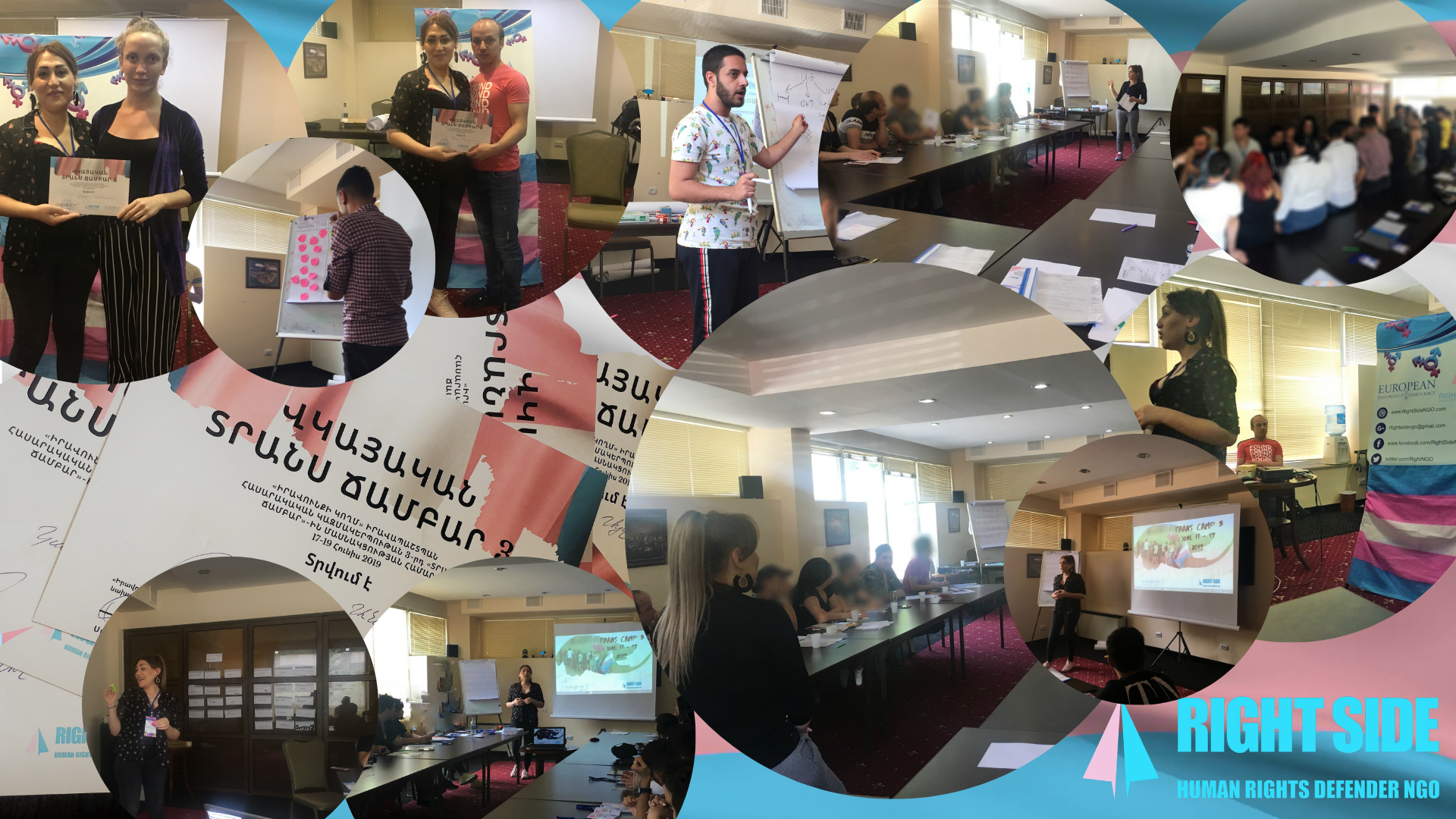 “Right Side” human rights defender NGO organized the 3rd Trans Camp օn June 17-19, 2019 in Tsaghkadzor. Founder and president of the organization Lilit Martirosyan officially opened the Trans camp. She introduced the history and achievements of the “Right Side” human rights defender NGO. The participants were introduced and got acquainted with each other. They set the rules of three days and shared their expectations for the camp. “Right Side” human rights defender NGO invited an international expert on gender issues to deliver the training. During the first day international expert opened training course on gender with the participants. Participants learned about sexuality, new international terms, such as biological sex, sexual behavior, gender, sexual orientation, and gender-based sexual orientation. The participants also learned leader’s skills The day continued with active discussion of biological theories of gender and gender identity, and then the expert introduced the characteristic features of the leader. According to one of the participants, “Training was very interesting, so much information in this short period of time and losing the sense of time was just fantastic, and even the school schedules are not so full, and I hope these camps will be continuous.” Another participant expressed gratitude by saying: “This is the third time the “Right Side” NGO is holding Trans Camp, raising issues and problems in Armenia, consolidating LGBTIQ people and activists under one roof, it is very big responsibility” Another participant said: “It is also a great support for all sex workers in Armenia, we learned a lot during the training, we were also able to get out of our everyday troubles and problems.” On the second day of the third camp, Lilit Martirosyan, president and founder of the “Right Side” Human Rights Defender NGO, spoke about hormonal therapy and sex. It is a problem facing each trans-person in Armenia. He noted that there are no endocrinologists who have been trained and hormone therapy in Armenia, which is very painful. Over the years, Human Rights Watch has raised these issues and offers solutions, but unfortunately it remains unanswered by the Ministry of Health. “Program Coordinator” Vrezh Varzhapetyan talked about cyber security and social networks. The problem was quite up-to-date for all camp participants. Getting acquainted with the safer ways of social networking, the participants directed Vrezh their questions that they were concerned with and received answers on them. With help of Vrezh participants checked how safe their social network passwords were, and they received advice on how to be careful about their own security. The next topic was on Sexual Health, and it was held by Healthcare Programs Director Dora. She discussed ways of HIV virus transfer, as well about its development, detection and prevention of the virus. Participants were provided with a tour of the AIDS prevention Center. Ashot Gevorgyan, Policy and programs officer, spoke about the ways to contact with the state bodies. They introduced participants to the activities of the Human Rights Defender and the Constitutional Court. They taught the participants how to write applications, complaints and at the end of the lesson, they urged them to be unbearable and proud. Among the participants there were also sex workers, some of whom shared their personal stories and told their happy and sad life. The conversation took place quite emotionally and exciting. Lilit Martirosyan, told how sex workers are being beaten in their homes, being threaten, months ago, when transphobic person tried to burn one of sex workers in her home and story of a sex worker’s whom throat was cut. “Right Side” human rights defender NGO once again proved during the Third Trans Camp that people are independent of their identity. The last day of the camp was full of interactive games and team discussions. At the end of the day, Lilit Martirosyan gave certificates on attending to participants Lilit Martirosyan noted that the trans camp will be continuous because it supports community members to know each other, unites LGBTIQ people and activists and helps to have a stronger LGBTIQ community in the whole Caucasus region. The camp was organized by “Right Side” human rights defender NGO and with the financial support of the European Endowment of Democracy.