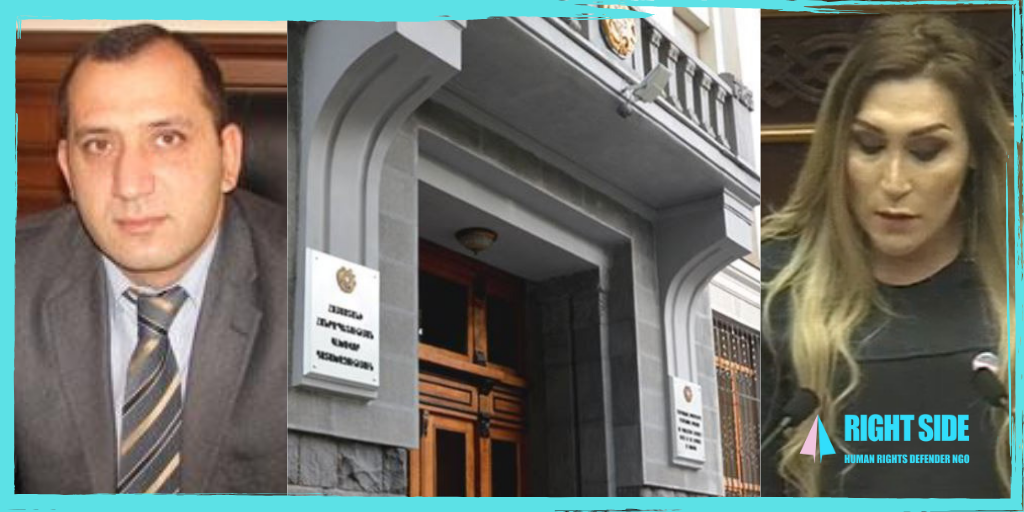 THE PROSECUTOR OF CENTRAL AND NORK-MARASH ADMINISTRATIVE REGIONS OF THE RA MR. A. AFANDYAN DECIDED TO REJECT THE COMPLAINT OF LILIT MARTIROSIAN.

On May 20, on a basis of being a groundless request from the Prosecutor’s Office of Central and Nork-Marash Administrative Districts, the first class adviser prosecutor A.Afandyan “Right Side” human rights defender NGO received the decision of the rejection of the complaint of “Rights Side” human rights defender NGO on the decision made by the investigator of the Central Department of the Police of the Republic of Armenia A. Voskanyan to refuse to initiate a criminal case on 16.04.2019 “Right Side” human rights defender NGO has requested.
“As to the plaintiff Lilit Martirosyan, many hate speeches, threats and revenge directed to her, which, according to Lilit Martirosyan, have caused an alarming feeling of fear for her life, it is worth mentioning that Lilit Martirosyan’s subjective perception does not reflect the objective situation, in this case, the objective reality does not give a real assessment of the threats addressed to Lilit Martirosyan as, in the particular case, Lilit Martirosyan’s public speech caused disagreement and anger of some people and they realized their right of freedom of expression guaranteed by the Constitution of the Republic of Armenia, so as those were not the real threats of murder, but just the expression of disagreement in that way, which is out of the scope of protection of criminal law too. ”
It should be reminded that on April 5, 2019 after a public speech on transgender people’s rights during public hearings in the National Assembly of the RA, a new wave of hate speech and threats began against the president of “Right Side” human rights defender NGO transgender woman Lilit Martirosyan, her colleagues and LGBTIQ people. On 06.04.2019 Lilit Martirosyan reported to the Central Police Station of the Republic of Armenia that after her speech at the National Assembly of the RA, the distributor of SAS supermarket chain illegally published her personal information on her residence address on his Facebook page. On the same day, Lilit Martirosyan reported that she had received life threats and violent messages released through public live broadcast on a video by a member of the militaristic group called “Eagle 30 mahapart Ararat”.
On 16.04.2019 the investigator of the department of Central Police Station of the RA Mr. Voskanyan, without taking into consideration all the obvious evidence of real threats, made a decision to reject the initiation of criminal cases on the provided materials. And this decision was approved by the Prosecutor’s Office of RA. However, the abovementioned decision was made with violations of rights of Lilit Martirosyan are subjected to elimination As for the video and the threats of murder, the investigative body noted that they were not real and a criminal case was not initiated on the basis of absence of “corpus delicti”. The threat of torture by any person may be treated as at least inhumane treatment (see Campbell and Constance v. United Kingdom, § 26) and, in particular, the fear of physical violence can be considered psychological violence and torture.
The qualification whether such a threat of physical torture is considered to be as a psychological torture or inhuman or degrading treatment, depends on the circumstances of the case, including, for example, the aggravating pressure and level of caused mental suffering. “(Gefgen v. Germany ([MF] No. 22978 / 05, ECHR 2010)):
The calls on hate speech, threats and revenge in the video and in Internet caused anxiety, fear for her life and health for Lilit Martirosyan, and the investigative body has not made enough effort to find out whether all the facts on that circumstances testify that these threats are real and are regarded as real ones by Lilit Martirosyan.
As for the approach of the Prosecutor’s Office of the RA for spreading Lilit Martirosyan’s personal information, according to which Lilit Martirosyan’s residence is posted on the official website of the Armenian Central Electoral Commission, it should be noted that the RA Prosecutor’s Office distorts the facts as not the registration address for Lilit Martirosyan was spread in Internet, but the address of her actual place of residence, which is not posted on the official website of the RA Central Electoral Commission. It should be noted once again that being limited to a period of 10-days to initiate a criminal case, the investigative body could not objectively give evaluate it, moreover, the presented factual data was more than sufficient for initiation of a criminal case and carrying out a proper investigation during the preliminary investigation.
In this case, it should be noted that in case of rejection to initiate a criminal case based on the reports of Lilit Martirosyan by the investigative body, significant damage is caused to her legal interests.
Therefore, the “Right Side” human rights defender NGO calls for:
1. To the RA law enforcement bodies to examine complaints filed by RA citizens in accordance with the RA laws and without gender-based discrimination, thereby improving the fair work of the RA law enforcement system.
2. To the RA legislative body to adopt legislation prohibiting the discrimination and hate speech, based on the principle of equality of all citizens of the Republic of Armenia.