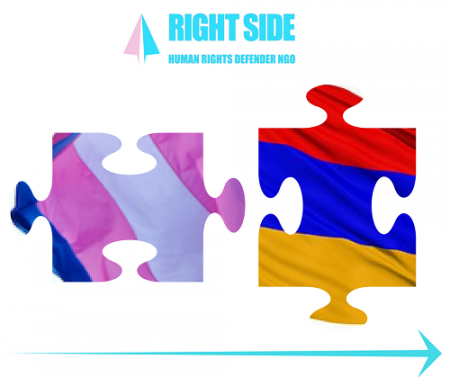 Today is September 21, celebrated as Independence Day of the Republic of Armenia. On September 21, 1991 after the referendum Armenia was proclaimed independent, democratic Republic by being separated from the USSR. Nevertheless, traditional Armenian perceptions and clear gender roles are of great importance in the Armenian society, which has already been regarded as independent for 27 years now. However, it should be taken into consideration that any “role” labeling already limits the individual’s freedom.
Unfortunately, the lives of trans people still depend on these perceptions of society. In the Republic of Armenia, trans people are deprived of their right to private life, subjected to violence, oppression, public blaming, family rejection, discrimination and stigma, being stoned for their free will expression when revealing their gender identity and expression outside of the cube of the stereotypical perceptions of the society. The Armenian society expresses not only hate speech against trans people but also it is often turned into hate crimes against them. In 2017, “Right Side” human rights defender NGO registered 100 cases of hate crimes committed against trans people and 123 cases in 2018. From the statistical data it is evident that the number of crimes against trans people has been increasing year by year. Unfortunately, this is not the only problem that trans people face. The RA legislation does not regulate issues related to trans specific healthcare: there are no medical regulations and corresponding specialists for transition and hormone replacement therapy, the legal name change process requires a psychological assessment, and gender legal recognition processes are humiliating and require mandatory sterilization of trans people.
“Right Side” human rights defender NGO reminds that human rights and dignity are the supreme values according to the RA Constitution. “Right Side” human rights defender NGO calls the Armenian authorities to ensure the equal rights of trans citizens of the Republic of Armenia through the adoption of comprehensive legislation on anti-discrimination, gender reassignment surgery, hormone replacement therapy, legal name change and hate crimes.