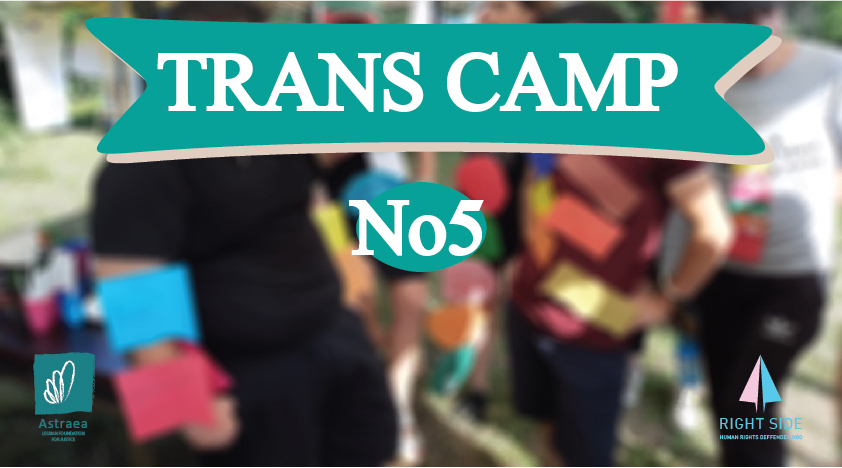 On August 24-26, 2020 the 5th “Trans Camp” was organized by the “Right Side” Human Rights Defender NGO for Trans LGBQI+ people, activists fighting for their rights and their allies.

The aim of the training was to promote the educational capacity and mobilization of the transgender community, their active involvement and participation in civic, socio-cultural and social life, be part of the advocacy for the rights of Trans people in families and workplaces, and, of course, combat stigma and reduce discrimination.

The founding president of the “Right Side” Human Rights Defender NGO Lilit Martirosyan made the opening speech on the first day of the training. She expressed her gratitude for participating in the camp, assuring that after the trainings the participants will leave with new knowledge, expectations and perspectives. After that participants introduced themselves and got acquainted with each other. They set the rules for the three-day camp and expressed their expectations and fears during the camp.

The third day also began with a summary of the previous day, followed by the creation of a platform for “Community Initiatives” and a discussion chaired by transgender activist Lilit Martirosyan. The latter presented the personal stories of other LGBTQI+ activists working in “Right Side” NGO, the next future steps and encouraged the involvement of new activists and supporter allies in creation and development of community initiatives. Next important topic to be discussed was the importance of security, particularly individual and community security. Participants talked about risk assessment and possible ways to avoid threats.

Lilit Martirosyan mentioned that the Trans camp will be continuous in order to support the mobilization of the community and the formation of self-help groups to create a stronger Trans community in the entire Caucasus region. “The camp will be continuous, as the camps organized over the years have proved to be the best for Trans people, there is a need to continue in the same way. The best proof is that the number of applicants is increasing year by year, for example, this year about eighty people applied for thirty places “, said Lilit Martirosyan. The latter also spoke about the psychological health of the activists, self-care, and the burning processes of the activists (burn out). Lilit Martirosyan presented the participants with certificates of participation in the camp, as well as volunteers who were selected and received symbolic gifts for the help to make the best of the camp.

Some participants expressed their gratitude and opinion about the Camp.

“I have had many difficulties in my life. The hardest part was when I was locked up at home because of my gender identity. I began to contradict my inner self. It was difficult, of course, but now I’m here and proud to be in a Trans camp where I can share all this with you. ”- 23 – year – old Trans woman.

“I am 20 years old, everyone is going through difficulties, I am no exception. But in my case, my parents, specifically my mother, was very tolerant of me, accepted me as I was. ”- Transgender man activist.

“It was just an incredible platform where I met people who shared my problems, now I know that I am not alone in the fight for our rights.” – Transgender woman.

“I want such knowledge-based meetings. I wish they are organized more often. Not even being a member of the LGBT community, I understand how knowledge based and important are such meetings for allies”- Trans ally.