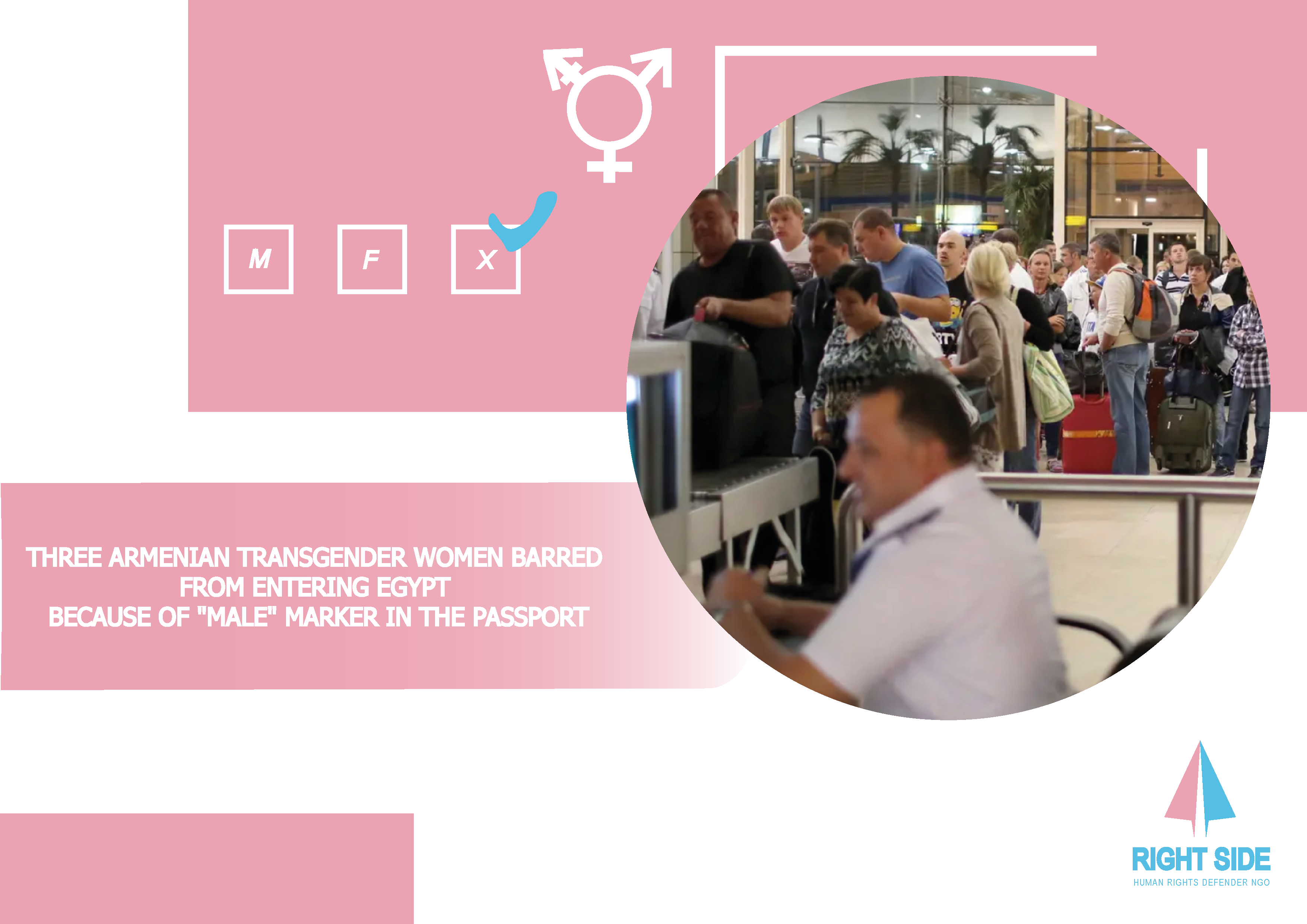 On February 22, 2021 “Right Side” HRD NGO received a request from three Armenian trans women to provide support to lift the illegal ban from entering the Arab Republic of Egypt and to assist in returning the expenses from the tour agency.

In February, three transgender women purchased fourteen-day travel packages to Sharm el-Sheikh, Egypt from two different travel agencies. Arriving at the Sharm el-Sheikh airport on February 19, after waiting for six hours, they were informed that “all three could not enter the country, since their passports state that they are “men”, and they can enter the country only after the female gender mark is indicated in the passport”. The transgender women travelled to Egypt, having previously consulted with a travel agency, with updated photos in the valid passports of the Republic of Armenia.

The border guards, by noting that “the headquarters of the security service in Cairo barred them from entering,” took the passports, isolated them in one of the closed cafes of the airport, deprived them of communication, did not provide food and water, and informed them that they can travel to Armenia only in fourteen days with a flight purchased by them. The border guards did not mark the passports with entry-exit stamps, and no deportation order was issued. For three days, transgender women regularly paid cleaning woment about 20 US dollars for water and chips, which allowed them to survive under severe psychological pressure and fear. Realizing that there is no other way, they paid the border guards three hundred US dollars in cash to be released and sent to Armenia with a next flight. Transgender women were able to arrive in Yerevan only in the morning of February 21.

There are numerous articles in international media about the problems of transgender people in the borders. There are many cases when such problems serve as a basis for corruption or human trafficking.

“One of the solutions is to stop marking the gender in passports, as there is no reason for a foreign country to collect data on the gender identity of foreigners, or the marking of gender should be done without forced sterilization, based on the principle of self-determination in Armenia”, added the lawyer of  “Right Side” HRD NGO.

The “Right Side” HRD NGO applied to the Embassy of Egypt in Armenia, the RA Ministry of Foreign Affairs and the RA Embassy in Egypt for clarifications. One of the agencies has already returned the expenses of one person.

The “Right Side” HRD NGO urges trans people to cancel their planned visits to the Arab Republic of Egypt to avoid similar problems, until the Embassy of Egypt will provide clarification on entry for Armenian trans citizens to Egypt. For security reasons, in all similar situations we advise transgender people to contact us online  and then to the RA Embassy.