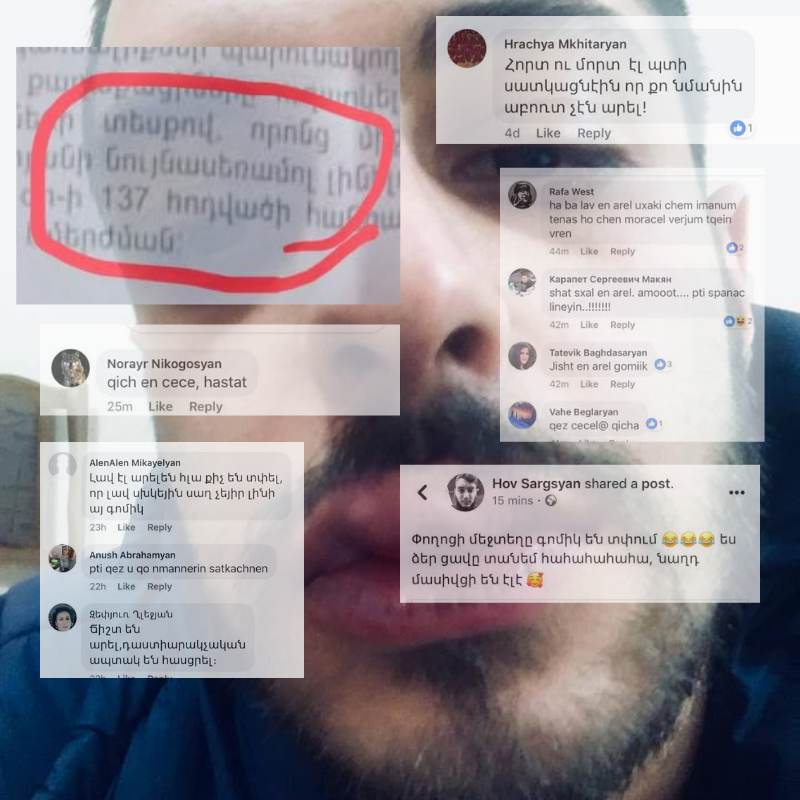 On the night of February 11th 2019, Vrezh Varzhapetyan, a staff member of the Right Side NGO, was assaulted by an unknown young man at the crossroad of Tumanyan and Koghbatsi streets in the center of Yerevan. After receiving serious physical and psychological injuries, Vrezh visited doctor and filled a complaint in the Police department. The central police department of the RA initiated a criminal case according to Article 118 of the RA Criminal Code (beating). Meanwhile, the case has been largely discussed by the the society in social Media. Vrezh still receives threats and hate speeches, on which a report has been submitted to the Police. The police has refused to initiate a criminal case on the grounds that there are no real threats, while the threats are available on the Facebook account of Vrezh and on the pages of other Facebook users. The Police has stated in its decision that Vrezh Varzhapetyan is “nuynaseramol” (ed: a term which used as an insult and marley is translated a homesuxal man with a sexual obsession with other man), and “Facebook users” expressed their anger with Vrezh being a “nuynaseramol”. Based on the above mentioned, Police has decided there are not enough materials to initiate a criminal case according to the Article 137 of the Criminal Code.

The refusal to initiate the criminal case based on the threats has been appealed to the General Prosecutor’s Office while the beating-related criminal case is in process.

Right Side Human Rights Defender NGO condemns such discriminatory and prejudiced approaches by legal bodies towards LGBT people and calls for a fair and impartial investigation.