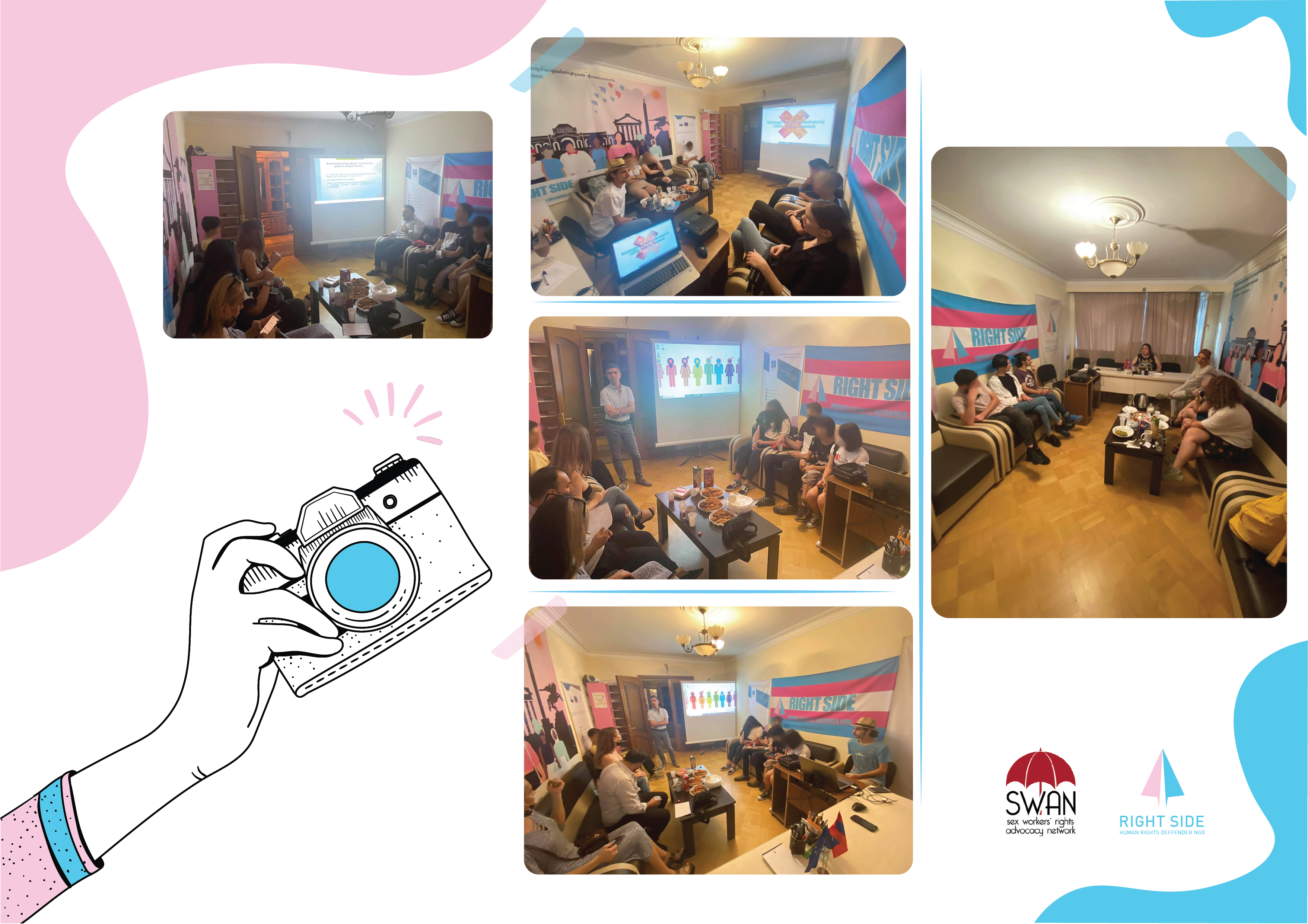 A NUMBER OF EVENTS THAT TOOK PLACE IN SEPTEMBER

From 14 to 20 September 2020, “Right Side” Human Rights Defender NGO organized a number of events; two of them were held through Zoom online platform, the others were held at the community centre of the organization.

On September 15 there was organized a meeting-discussion on “HIV/AIDS and STIs” at the “Right Side” NGO’s community centre.
The meeting was meant to raise the awareness of Trans and LGBT+ sex workers about HIV/AIDS to fill in the educational gap among the community.
The meeting was held by Lilit Martirosyan who is the President of the NGO. During the event, participants discussed a number of issues related to HIV / AIDS and STIs with the president of the organization. Lilit Martirosyan particularly explained what STI is, what kind of STIs are there, how to prevent them and how to do medical checks. After all, Mrs Martirosyan answered to all the questions of the participants. In the second part of the event, an online meeting was held, during which we talked about how we could advocate for the right to health. The meeting became a reality through the Zoom online platform, which was attended by more than 14 Trans LGBTQ + sex workers. The meeting was held by Artak A., the Community Mobilizer of the organization. Artak presented what was advocacy and what kind of activities and resources were used for that. It was also discussed about health, access to medical services, government’s obligations that had to be fulfilled to maintain public health. Artak A. summarized the meeting by answering all the questions.

Then, on September 16, another event: “Our Needs and the Discrimination Cases during COVID-19” was implemented at the community centre of the “Right Side” NGO. After the event, the lawyer of the NGO provided legal consultation to transgender sex worker community. During the event, all participants were informed about discrimination, its direct and indirect manifestations, the protection mechanisms, the need for anti-discrimination legislation, etc. Then, by highlighting the discrimination cases during the epidemic, the participants tried to approach the cases more critically and look for solutions for them. In the second part of the event, the participants actively discussed about Trans LGBIQ+ sex workers needs during COVID-19. They spoke about their psychological, financial and social needs. In addition, they discussed about the importance of the organization’s financial and social support projects, especially the active work of community centre, which provides non-formal education to and ensures socialization of Trans LGBIQ+ people and sex workers.

Moreover, on September 18 “Right Side” Human Rights Defender NGO realized another webinar through the Zoom online platform. The aim of the webinar was to raise the awareness about the right to health and prevention of Sexually transmitted infections (STIs) among Trans LGBIQ+ sex worker community. The training was held by Lilit Martirosyan, President of the organization, who presented what is hormone therapy, its international and local practices, she also presented the legal gaps and legal situation of that. After all, Lilit Martirosyan spoke about where and how to do medical checks in order to be informed about their STIs and HIV/AIDS status. Besides, she spoke about the services of the organization. Then Lilit Martirosyan answered all the questions of Trans LGBIQ+ and sex worker participants.