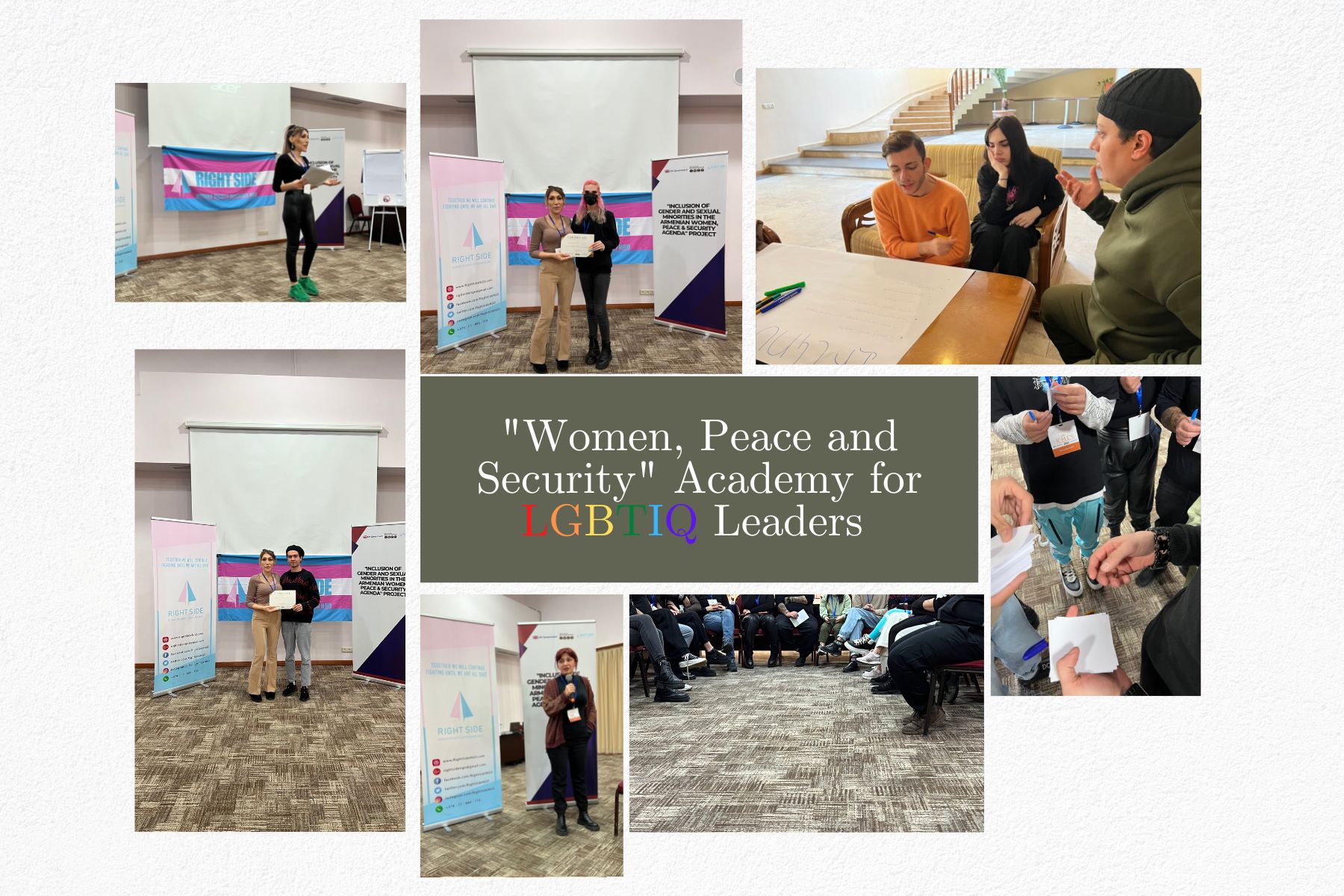 The Right Side Human Rights Defender NGO funded by a grant from the Institute of War and Peace Reporting (IWPR) with the support of the UK Government implemented an academy for LGBTIQ activists the aim of which was to promote the efforts of the civil society to increase the participation of underrepresented communities in the promotion and implementation of the WPS agenda in Armenia.

Within the framework of the 7-day academy, 18 TRANS LGBIQ people had the opportunity to gain new knowledge about the Women, Peace and Security (WPS) agenda, UN Security Council resolutions related to the WPS agenda (1325, 1820, 2250, 2122…), as well as other international resolutions on women’s and human rights, conflict transformation, peacebuilding ways and mechanisms that would contribute to the inclusion of LGBTIQ people in the efforts to create a peaceful society and to advocacy for the inclusion of gender and sexual minorities in peacebuilding processes. The participants have learned to use their knowledge and advocacy tools to present the LGBTIQ community issues and challenges to the state and the international community, as well as to promote the inclusion of gender and sexual minorities in the WPS agenda.

On the first day of the academy, Arpi Balyan, Fem Library Co-Founder, and Lilit Martirosyan, Right Side HRD NGO President conducted the training.

Through practical work, the participants mapped the problems existing in the RA Armed Forces and presented the issues and dangers they had faced during the war.

In the second half of the day, Arpi Balyan continued the training, talking about the stages, levels and types of conflict, described obstacles and challenges  that women face in peacebuilding processes.

Continuing the day, A. Balyan introduced to the participants the queer feminist anti-militarist project  “I’m talking to you, you are not listening to me” realized in 2017, showed the participants footage and monologues from the performance, which raised many questions and led to different discussions.

On the second day of the academy, Lida Minasyan, “Women’s Agenda” NGO Co-Founder was invited as a trainer, who spoke about the following topics in the first part of the day:

The topics were entirely new and raised many questions among the participants, through discussions Lida gave comprehensive answers.

On the third day of the Academy, L. Martirosyan made a summary and assessment of the previous two days, then, by dividing the participants into groups, assigned them to map the problems and challenges of the GBTIQ people in the RA Armed Forces and military commissariats. After the group work, the participants presented the completed work, highlighting all existing problems and coming up with solutions. It was discussed what concrete steps and actions should be taken in the future to reduce the stigma, discrimination, violence, humiliation and various tortures by the employees of the armed forces and military commissariats.

In the second part of the day, Lara Aharon, Founder and Co-Chair of the “Women’s Resource Center” NGO, after getting acquainted with the participants, reflected upon a number of topics, such as the 1325 resolution as a tool, the work done on the resolution and their results in Armenia. She talked about the role of women, patriarchy and feminism, which raised numerous questions among participants, because the topics were very interesting and after the newly gained knowledge the participants mentioned that they had different understanding and ideas about women’s role and feminism. Lara Aharonian answered all the questions and promised that such discussions would be continuous.

On the fourth day of the academy, the participants continued their group work, collecting and presenting all the cases related to stigma and discrimination against the community members.

Knarik Mkrtchyan, Local Project Coordinator of the Institute for War & Peace Reporting, being the guest of the academy on the fourth day, after the introduction, told about the program and activities, answered the questions of the participants, and then spoke about 1325 resolution, advocacy activities.

Knarik conducted group work with the participants, reviewing the LGBTIQ people issues and discussing the gaps in the national action plan. After the discussion, the participants came up with new recommendations and shared their experiences.

On the fifth and sixth day of the academy, Right Side HRD NGO Lawyers Sona Harutyunyan and Artur Margaryan spoke about legislative gaps, presented ways to protect oneself from gender-based violence and hate speech. The lawyers mapped the problems with the participants, and then suggested continuing the meetings in the organization. A secret voting was held and the best 8 activists – the WPS agenda Ambassadors were chosen, who will later have meetings with the representatives of the RA Ministry of Defense and the military commissariats of various regions, advocating for the inclusion of LGBTIQ issues in the WPS agenda and in the National Action Plan of Armenia on UNSCR 1325.

On the last day of the Academy, Lilit Martirosyan summarized all the days, made a closing speech, handed out certificates, thanked the participants for their active involvement, then added that the Right Side HRD NGO would spare no effort to promote the implementation of a number of legislative reforms for the benefit of TRANS LGBIQ people.

“This article is produced under the project “Inclusion of Gender and Sexual Minorities in the Armenian Women, Peace &amp; Security Agenda”, with the financial support of the UK Government’s Conflict, Stability and Security Fund, through a sub-grant from the Institute for War and Peace Reporting (IWPR). The opinions, findings, and conclusions stated herein are those of the authors and do not necessarily reflect the official position of the UK Government or the views of IWPR.”